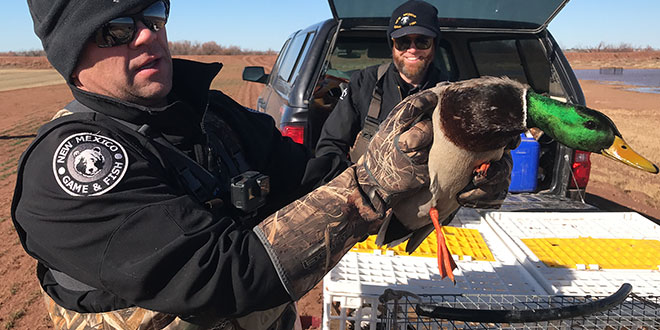 Earlier this year, Department of Game and Fish biologists and conservation officers were involved in a multi-state, multi-agency collaborative study of northern pintail duck movements throughout their wintering range.

The team set out swim-in traps at the Department-owned Bernardo and W.S. Huey Waterfowl Management Areas to capture, band and attach global positioning system (GPS) backpack transmitters to northern pintail ducks. Along with the 24 pintails that received transmitters, all ducks captured were banded and recorded for future information on duck movements. Watch the corresponding video below to learn more about why and how banding occurs. 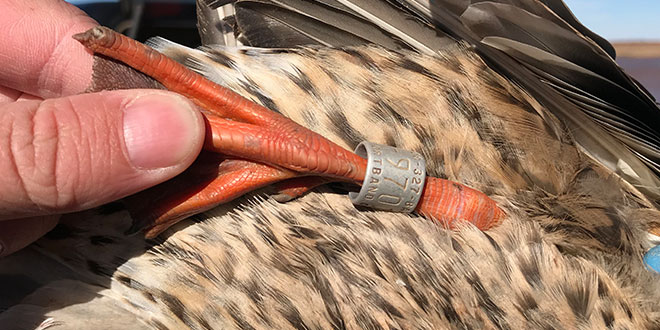 Above: A leg band on a duck (notice the discoloration, this duck had been banded in the past and, before being released, the band number will be recorded to help see where this duck has traveled). Department photo by Cody Johnston.

This technique has been used for decades, helping biologists keep track of where a captured or recovered bird was originally banded and how long ago. With this information, biologists can gain a better understanding of migration patterns in both a species’ breeding and wintering ranges and their potential lifespan. 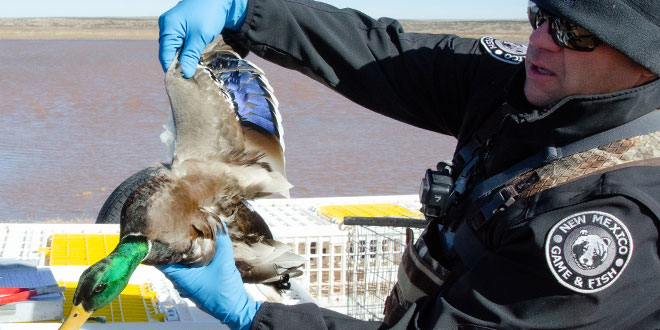 If you haven’t heard of banding before, bands are small rings with information stamped on them that are then attached to the leg of a bird. Bands are lightweight and do not affect flying or health of the bird. For biologists, the first step in banding is preparing multiple traps and methods for catching the birds so that eventually a band can be attached and the bird can be safely released back into the wild. This type of trapping takes time, effort and a little luck.

If during the course of your hunting season you harvest a bird with a band make sure you go online to www.reportband.gov to report the information on the band. This information is very important to biologists and allows you as a hunter to play a small role in the biological management of the species. As a bonus, after entering all of the information on the band you will get to find out where and when the bird was banded, how old it was, the sex and species, and you get to keep the band. 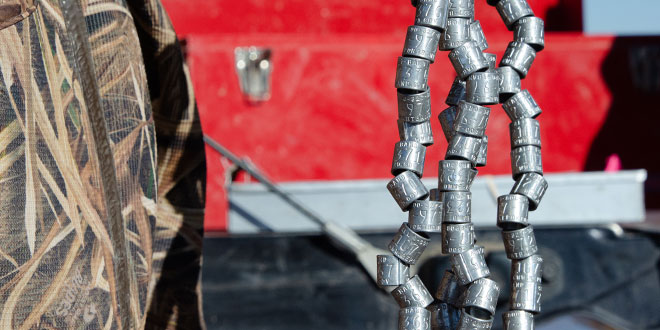 Above: A biologist holds a string of leg bands that will eventually be used to help track the movement of ducks. Department photo by Cody Johnston.