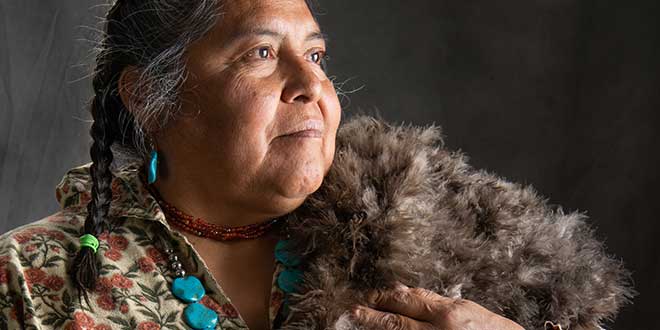 DCA archeologist weaves a blanket made of 17,000 turkey feathers

In 2018, Mary Weahkee, an archeologist and anthropologist with the New Mexico Department of Cultural Affairs, was asked to try her hand at a particular task that dates back to more than 1,000 years ago: weave a blanket made of turkey feathers. 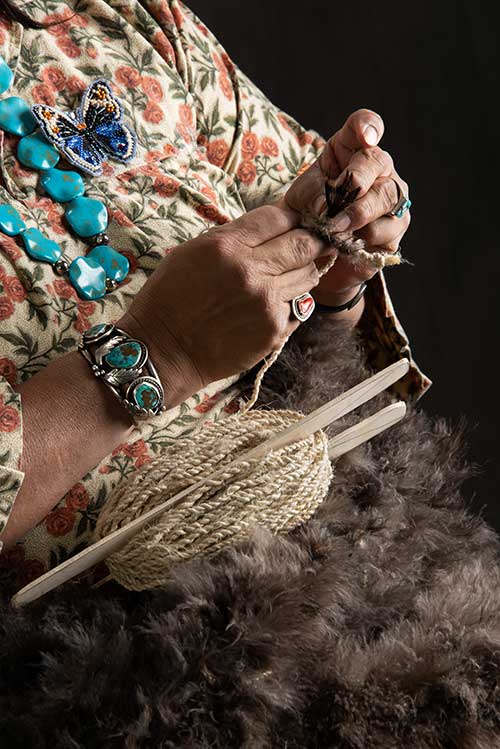 Above: Mary Weahkee, an archeologist and anthropologist with the Department of Cultural Affairs in Santa Fe, weaved a blanket with thousands of feathers from turkey hunters. Department photo by Martin Perea.

Weahkee taught herself the technique, the process of winding each feather around yucca cord, by examining ancient blankets housed at museums around the western United States.

Producing this large, two by three-foot blanket took 18 months using 17,000 feathers from 68 turkeys. She tried out the technique twice before, producing two one by one-foot samples a few years ago for the museum at Chaco Canyon and the Aztec Monument Museum.

“I looked at how the ancestors were creative and patient,” said Weahkee, who is of Comanche and Santa Clara descent. “It’s a labor of love.”

Calling the weaving method “a simple technology,” Weahkee said it took her about a day to teach herself how to weave with feathers and yucca cord, she said. While there are a handful of other small samples in a few western museums, Weahkee’s is the largest known blanket ever made in modern times.

Tracking down that number of body feathers from so many turkeys would require some help. She reached out to the Department of Game and Fish and was put in touch with Storm Usrey, conservation education manager with the Department.

Usrey, a turkey hunter himself, gave Weahkee the pelts from turkeys he harvested.* He also asked friends and family members who he knew harvested birds to offer the body feathers to Mary as well. “I tried to step up and get her as many body feathers as I could,” he said.

Jack Young, archeologist and tribal liaison with the Department of Game and Fish, said the Department has an ongoing request from several pueblos for wild turkey feathers. “It’s that big of an icon for modern pueblo cultures to use turkey feathers in ceremonial use, and in prayers,” he said.

Feather robes originated during what archeologists call the Pithouse phase, when people began to explore agriculture and become more sedentary, around 700 AD. This is also when people started to keep turkeys as livestock, raising them specifically for harvesting their feathers. “They weren’t keeping them entirely for meat but for the feathers, similar to keeping sheep for wool,” said Young.

Turkey-feather robes were found in Anasazi burials—in particular, what was interpreted as high-status burials as well as cases of some child burials. Eventually, turkey feathers were no longer the preferred material; cotton soon replaced turkey feathers for producing textiles, Young explained.

“Turkey feathers would have been an ideal choice for a blanket, as the large feathers from a turkey would be a lot easier to work with than small song bird feathers,” said Casey Cardinal, resident game bird biologist with the Department of Game and Fish.

Feathers provide excellent insulation, continued Cardinal, noting that there are several feather types on birds, but semi-plume and down feathers are the primary insulators. Birds use these feathers to trap pockets of air around their bodies. The combination of feathers and air can keep them warm, even during extremely cold weather. Preening and fluffing are ways that birds can adjust the amount of air, and the insulation level, around their bodies.

Another key reason for using turkey feathers: turkeys as a species are more easily subject to domestication than many other bird species, as they are non-migratory and can be lured in by artificial food sources. 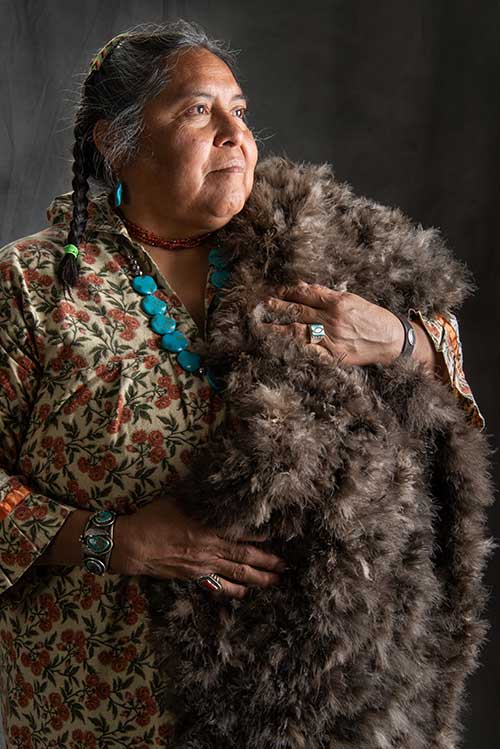 Above: Using a technique that goes back more than 1,000 years, Mary weaves turkey feathers around yucca cord.

Creating replications of ancient artifacts is one of Weahkee’s specialties. As a lithic analyst—someone who studies ancient stone tools—she often makes replications of tools such as scrapers, drills, projectile points, arrows and bows.

Weahkee is already in the process of replicating another item out of turkey feathers. This time she is weaving a feather raincoat for the New Mexico History Museum in downtown Santa Fe to replace the one that has been on display for ten years. Rather than using turkey body feathers, however, she will be using wing fletch feathers. Usrey said he has one turkey pelt for Weahkee and plans on saving more for her as he collects them.

“Fletch feathers are better for being outdoors,” she said, noting turkey fletch feathers have also been used for making mukluks, a type of foot gear, as well as weaponry. “The fletch feathers repel water and don’t hold it, unlike the body down feathers.”

* When donating animal parts, hunters must fill out a required form with the hunter’s name, date of harvest and what he or she is providing from the animal to the recipient. “Even if it’s an artist requesting animal parts you still need the paperwork,” said Usrey.