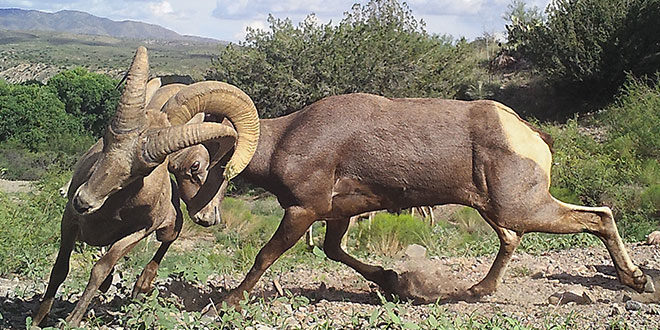 Ben Ikenson In the Field

On a remote site of rugged, mountainous terrain in the southwestern corner of New Mexico lies the Red Rock Wildlife Management Area. Since 1980, this 1,500-acre captive breeding facility for desert bighorn sheep, originally stocked with animals captured in the nearby San Andres Mountains and in Mexico, has produced more than 500 bighorn that have been used to augment wild sheep populations throughout the state. The facility and its brood have been central to recovering desert bighorn sheep from its state-endangered status, and enabling it to become a hunted big-game species.

“It’s one of the biggest conservation success stories in the state,” says Eric Rominger, a biologist with the New Mexico Department of Game and Fish who has worked on bighorn sheep conservation for more than 40 years. “These animals were on the brink of extinction and are now a viable presence in the ecosystem.”

More recently, work at the site produced another major conservation milestone. Rominger, teaming up with biologists from the U.S. Fish and Wildlife Service, used the Red Rock facility – and the desert bighorn sheep it contains – to field test a promising new wildlife survey methodology. By using camera trapping and accounting for the undetected proportion of the population through distance sampling, the research team validated its results with unbiased estimates of abundance for a known bighorn sheep population. Their research, conducted over the past four years and recently described  in the research journal Scientific Reports, pioneers an innovative new way to estimate animal population sizes simply, safely and affordably, with remarkable accuracy. And, it has implications for wildlife management efforts across the globe. 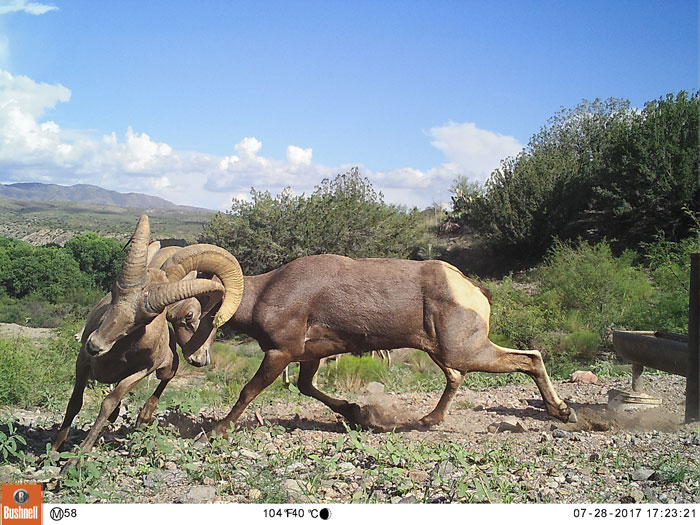 Counting sheep is not just for the sleep-deprived. Sound wildlife management requires good data. By helping determine animal population sizes, wildlife surveys are vital to effective stewardship strategies, be it regulated hunting and quota setting for game management or the conservation of endangered species.

“But counting animals is no simple task,” says David Stewart, a statistician for the Fish and Wildlife Service. “Surveys must have desirable properties, with samples that are both representative of the population and replicable; and they should produce an estimate that is consistent, unbiased, precise and, most important, easy to compute.”

But when it comes to being surveyed, all animals are not created equal. Those with distinct markings, such as ocelots or giraffes, make for more convenient individual identification, and therefore easier population surveys. Similarly, animals that occupy open areas, like Serengeti grasslands or Arctic tundra, are readily observed and counted from small aircraft. Obviously, though, many species don’t have distinctive telltale physical features or inhabit open landscapes – and a simple process is needed for counting them, too.

Stewart and company used camera traps, placed in animal habitats to capture images when animals move in front of them. Unlike people, cameras operate all day, every day, without complaint. The challenge with camera trapping, however, is transforming animal images into useful metrics about wildlife populations.

“In the past, estimating abundance of animal populations using camera traps was limited to those containing marked individuals or animals with uniquely identifiable pelage (fur) patterns,” says Matthew Butler, a biometrician with the Fish and Wildlife Service. “With uniquely identifiable animals, biologists can implement mark-recapture techniques to estimate abundance from camera trap images.”

Grant Harris, another Fish and Wildlife Service biologist and project collaborator, explains: “Pretend you want to know the number of catfish in a pond. You boat out, catch 50, and mark each with a small tag before releasing them. Two days later, you catch another 50 catfish, and 25 have marks (the tags). You tagged 50, re-caught half, so the pond estimate is twice the original sample, namely 100 fish. Basically, this is how the estimation process works with marked animals, be it fur patterns or tags, as in our example.”

With many animals, though, it’s not that easy to identify individuals, and marking them with unique tags can be expensive, time-consuming and sometimes quite dangerous. Imagine the task of tagging an African lion, for example.

“Therefore, a technique that doesn’t rely on uniquely marked individuals was needed to move camera trapping from hobby to science,” Butler says.

To estimate animal numbers without marks, the team combined camera trapping with distance sampling, a process that builds a mathematical function based on the assumption that animals further from an observer, or camera, are less observed than those that are close. 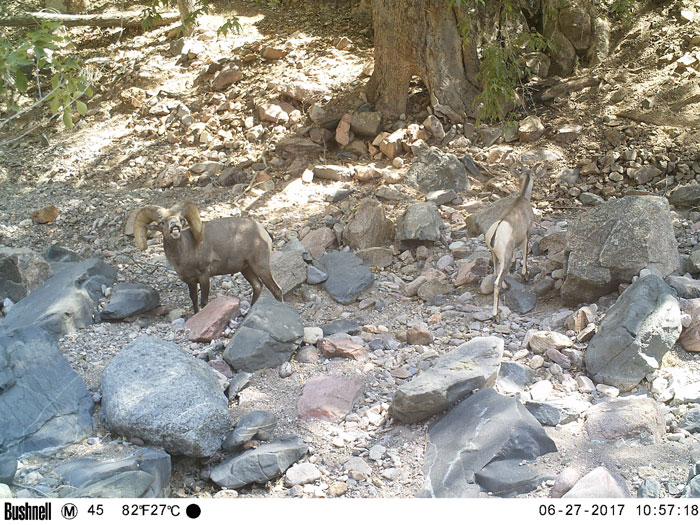 Above: Large desert bighorn ram “lip-curls” ewe on camera. The “lip-curling,” or Flehmen response, seen in this impressively adorned ram allows him to detect pheromones, and other olfactory characteristics of his environment.

The Red Rock Wildlife Management Area provided the team with an unprecedented opportunity to field test their methodology with a known animal population size. Of the bighorn population at Red Rock, Rominger says that all births, deaths and removals are recorded, “…and, since 1997, the facility has been surveyed each year, resulting in a true count. So, this intensively managed herd provided an extremely rare opportunity where the population size of a wild animal in native habitat was known.”

Harris adds, “Having this known population was important because we could test our method and evaluate how well it worked by comparing our results to truth.”

At Red Rock, the research team combined imagery gathered from 11 trail cameras spaced along an 800-meter grid, and used distance sampling to estimate the abundances of the desert bighorn sheep within it. The team measured the distance between the camera and every desert bighorn sheep pictured, building a mathematical model to describe that relationship.

Distance sampling isn’t new, but coupling it with camera trap imaging is a relatively novel approach to conducting wildlife surveys. Traditional distance sampling-based surveys involve people going to sample locations and measuring distance-observed animals. For animals that avoid people, this technique is clearly not ideal. Further, with observers, data amount depends on having enough people performing the counts, and their time (and cost) can be a limiting factor. Replacing people with camera traps, the team theorized, could potentially resolve these issues, and increase sampling acquisition 24/7.

Without known population numbers, wildlife managers can’t really know with certainty if a technique works. As Butler explains, “biologists often have no way to verify population estimates and end up comparing results from multiple techniques to assess if the new method worked. This is poor practice, though, because no one knows which, if any, of the estimates are correct.”

Stewart adds, “rarely do opportunities exist to field-validate a survey against a known population size to determine if the estimates produced are unbiased and precise.”

Butler and his peers were able to verify their results at Red Rock. Their work was unbiased and, as their study indicates, the survey method produced results that were consistently within five animals of the actual known desert bighorn population size. The true number of adult bighorn sheep, for example, was 53 in the fall of 2017 and 69 in the spring of 2018; and their method estimated a mean of 55 and 66, respectively.

“This is very significant,” says Harris. “In the U.S., helicopters are often used to count bighorns, which is expensive and dangerous. Globally, over 70% of wild sheep and goat species are endangered and, in most places, it’s unaffordable to fly and count them, so population sizes are unknown. Our method offers a cheap and applicable solution.” 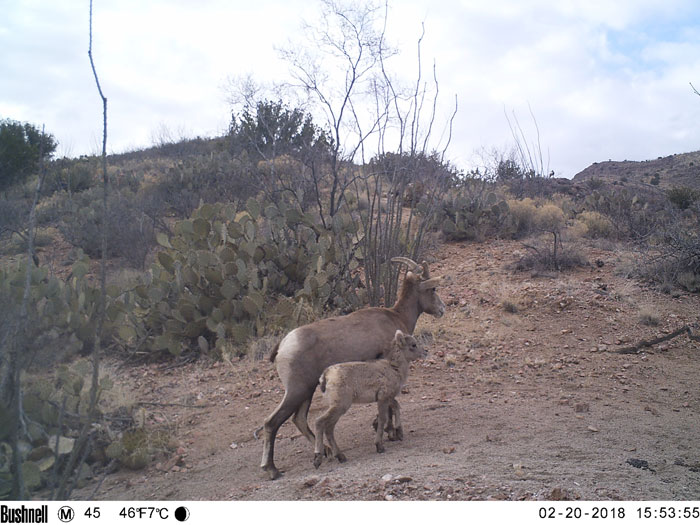 Above: This new lamb knows that keeping close to its mother is necessary for survival. Within days of birth, lambs are capable of navigating the same rugged and steep terrain as their mothers.

Indeed, the International Union for Conservation of Nature recently highlighted the team’s research as filling an important data gap for improving species’ threat assessments and informing conservation efforts, especially for populations of wild sheep and goats.

In fact, the innovative survey technique was used, and recently documented, to estimate population sizes of bharal, a Caprinae species, and musk deer, a primitive deer-like ruminant, in a remote region of India. Such work contributes to the Wildlife Institute of India’s impressive endeavors to assess ungulate status and the associated anthropogenic pressures in the northeastern region of the country.

Of course, Caprinae management efforts in remote areas such as the Trans-Himalayan region and elsewhere include their own complex challenges. Throughout Eurasia, northern and eastern Africa, male and female mountain goats, for example, often display different patterns of space usage. The Alpine ibex inhabits the European Alps, and here females prefer rocky areas more than their male counterparts. Sampling designs, therefore, must rely on information specific to the habitat selection of not only the target species, but of each gender, too.

“Biologists must also ensure that sample size (and the number of cameras needed) is attainable, to generate the precision required,” adds Harris.

Fortunately, to this end, this team developed a “how-to” document describing the procedure for determining the sample requirements to meet a given precision objective.

Currently, with most cameras costing around $200, the financial investment in this distance-based approach becomes more tenable than an aerial flight. (Fifty cameras would cost around $10,000, whereas the cost of a survey with helicopter flight typically runs around $50,000.)

Granted, the investment of time in analyzing images and identifying species and the distances between the animal in the image and the camera is considerable, but the work is becoming increasingly streamlined with emerging image processing and pattern recognition techniques. For instance, the freeware designed by Microsoft known as MegaDetector can identify when an animal is present in an image, though it cannot yet identify the animal to species.

Additionally, despite the challenges, the abundance procedure has immediate applicability. The method is separable by animal sex and age class, to estimate abundances for different classifications of rams (Class 1, 2, 3 and 4; older rams with larger horns are in the higher age classes). Such data assist quota setting in areas with sustainable hunting in North America, central Asia and north Africa. Sudan, for instance, recently allowed the hunting of endangered Nubian ibex, and abundance estimation with camera traps would allow setting sustainable quotas. The method would also enable quantifying the responses of these populations to hunting.

Worldwide non-governmental agencies often support Caprinae efforts through the removal of predators and the establishment of water sources to facilitate population growth. The efficacy of these strategies also could be quantified using population estimation with camera traps, to measure the returns on the financial investments associated with the work.

In countries throughout southern Africa, USAID’s Community-Based Natural Resource Management program, which emphasizes localizing resource management, could similarly benefit. The program includes regulations to match consumable resources with quotas that are understood, agreed upon and respected by the communities managing them. Using the distance-based camera trap methodology, these communities can generate such quotas robustly and confidently.

“We actively pursued this project because so many Caprinae are in dire conservation need,” says Harris. “Their existence depends on empowering others with safe, simple, and inexpensive tools to gather the data necessary to conserve and manage them.”

Furthermore, the approach is applicable beyond the realm of Caprinae conservation. For management of chimpanzees in Côte d’Ivoire, marmots in Italy or sitatunga in Uganda, the distance-based camera trapping method is currently providing assurances that wildlife surveys reflect a greater degree of accuracy.

“Now,” says Butler, “biologists around the world can more confidently apply distance sampling techniques with camera trapping to estimate the population size of any wild, unmarked animal. This is exactly the kind of approach needed in jungles, forests and remote mountains.”

Ben Ikenson is a former writer for the U.S. Fish and Wildlife Service.