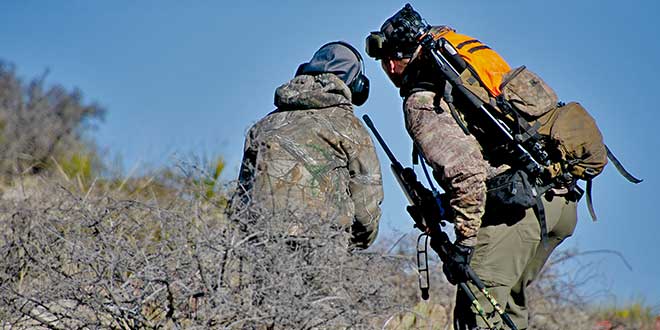 There was a steady wind whipping through the canyons of southeast New Mexico, kicking dust in the air, the bushes looked like they would fly away at any second. The temperatures did not want to budge. There was no sign of letting up.

It was no matter, though; only 20 minutes earlier the hunting guide had spotted a distant herd of Barbary sheep, and the weather went out of everyone’s mind.

A slow stalk commenced over a barbwire fence, down a small gully and up the side of a hill, with the guide stopping every few hundred yards to assess where the herd had moved so he could direct his hunter. Each slow step put them closer, and then it happened.

There, just ahead, a sheep had stopped in range, the guide slowly pulled out the shooting sticks and quietly set them up. His hunter prepared to take his shot, finally resting his rifle down on the sticks as he peered down the scope trying to line up the crosshairs.

At this point you may be thinking this sounds like one of those expensive guided trips for the biggest animal, or the start of that T.V. hunting show everyone is talking about in camp. But for this hunter, it would be his first big game hunt. At only 11, Isaac Chaney was getting ready to create a memory that would last a lifetime. 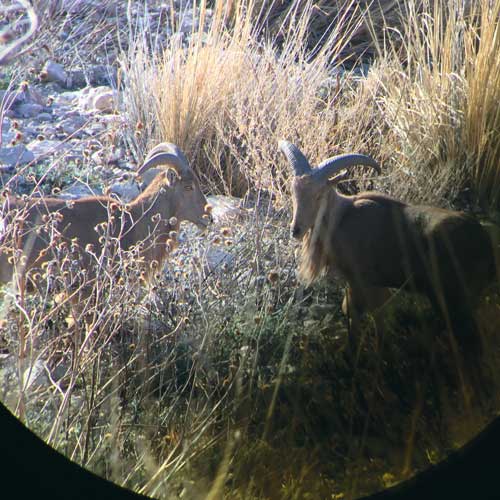 Isaac had arrived only the day before with his dad from La Luz after being one of 10 youth invited by Department of Game and Fish conservation officers to participate in a youth Barbary sheep ewe hunt.

For those who may not know, Barbary sheep are not native to New Mexico but were released to provide a unique hunting opportunity. Originally brought into the state privately in the 1940s, Department releases began in 1950 after finding that these sheep, native to North Africa, took well to the desert of southeast New Mexico.

The year before the hunt, district conservation officer Travis Nygren had seen an opportunity to give new hunter education graduates who had never purchased a license a chance to go out for Barbary sheep. Nygren worked closely with the owners of the Blackwater Ranch and Westall Ranch who agreed to allow youth hunters to come hunt on their property. He had the place and a list of kids; all he needed were guides to help take out the kids. It didn’t take much convincing to get other conservation officers to offer their time.

The kids arrived at the ranch, situated near Arabella, on a Friday afternoon. They met up with the officers who would be their guides. After getting situated, the kids prepared for their hunt at the shooting range set up by the officers so they could sight in their rifles. It didn’t take long for the kids to start shooting with accuracy and their guides to feel they were ready to hop in the truck and find some sheep.

Isaac was now in position, with his gun resting on the shooting sticks. The wind was still blowing strong so he had to work on steadying himself and the gun before he took a shot. His guide, conservation officer Kurt Felix, was by his side giving him pointers, reminding him to take a breath and take into account where he aimed due to the steady wind.

After a few dozen seconds of watching, a loud boom reverberated off the canyon walls. Isaac and Kurt both stood still as we waited downhill to see if Isaac had hit his mark. It didn’t take long for Kurt to look proudly at Isaac and declare, “You got it!”

The immediate smile that lit up Isaac’s face and the thumbs up he turned and gave his dad was the sure sign that this was not something that Isaac was going to forget.

Within the first few hours, other young hunters were already filling their tags and preparing their ice chests to take home their harvests. By Saturday morning, only a few remained who were trying to get close enough to get a Barbary sheep within their range.

The opportunity to have a hunt fully guided by officers who get to spend the days outdoors and know the area is already quite lucky, but to be able to do it on a private ranch where there are lots of chances to come across a Barbary sheep is the icing on the cake.

These youth came away from this experience with not only memories but something to put in their freezers, and it was thanks to a group of conservation officers who saw an opportunity. For each of these kids their first hunt was something special, and hopefully began a lifetime of hunting traditions. 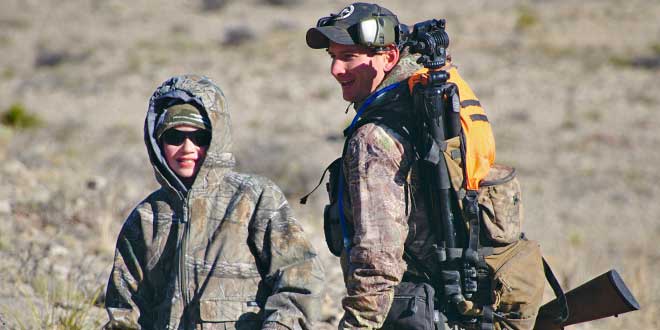 Above: Isaac with Officer Felix. Department photo by Cody Johnston.

More about this hunt