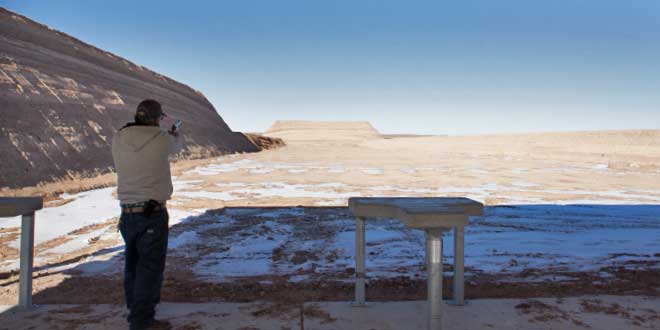 When Stephen Bush, a rancher and avid hunter with deep roots in the northeastern town of Clayton, passed away in 2013, there was not a service, not even an obituary in the local newspaper. The only thing he asked of his wife Susie, was to have something to show that he lived on Earth. He also wanted a shooting range.

Fast-forward a few years when several community members from Clayton approached the Department of Game and Fish about building a public shooting range in Union county. Land was going to be the deciding factor.

Above: A visitor practices at the new shooting range. Department photo by Jessica Fisher.

For Susie Bush, this would give her the perfect opportunity to honor her husband, who was born and raised on a Clayton ranch. They met in Colorado and married in 1977, eventually making their way back to New Mexico in 1994, where they settled on a ranch in Sedan, near Clayton.

They had purchased 320 acres on the north side of Clayton just before Stephen passed away.

In addition to hunting, Stephen enjoyed target shooting. Susie determined the best way to fulfill her husband’s wishes was to donate half of the property to the Department to build a shooting range.

During the initial planning stages, the Department decided the first phase of the project would be establishing a primitive 200-yard shooting range. However, Susie wasn’t satisfied with that, so she contributed a significant cash donation to be used as a match against the federal Wildlife and Sportsfish Restoration grant.

The range was expanded to include two additional bays, each 50-yards. One range for pistols only and another for smallbore rifles to accommodate youth shooting sports programs like 4-H. Shade structures over the firing lines were added as well as a vault toilet. There are also primitive areas that can be developed for archery and shotgun ranges in the future.

Starting March 6, 2020, all this range has to offer will be free to the public, open seven days a week from dawn to dusk. 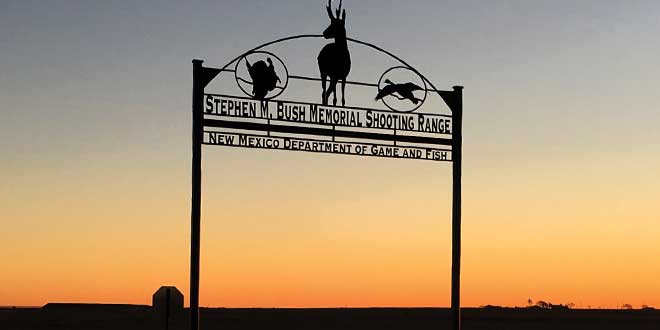 Jessica Fisher is the Shooting Program Coordinator for the New Mexico Department of Game and Fish.