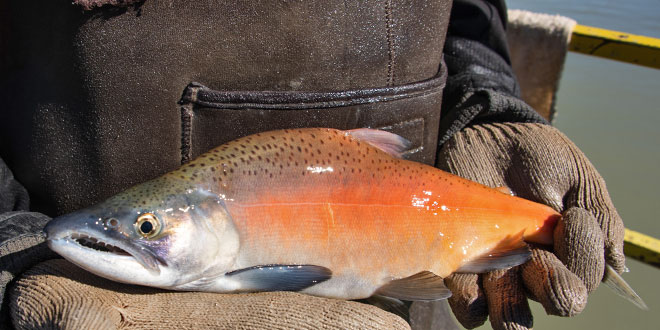 Kokanee salmon are not native to New Mexico. A land-locked sockeye salmon, they thrive in some of the deeper and colder plankton-producing lakes in our state such as Heron, El Vado, Navajo, Abiquiu and Eagle Nest Lakes.

Kokanee mature between three to five years old and achieve sizes of three to five pounds. The current New Mexico record, caught in Navajo Lake in October 2000, was four pounds. The fish prefer waters 15 to 90 feet below the water surface and move up to the surface at dawn and dusk to feed on zooplankton and insects.

Locating kokanee takes some practice. Fish finders, an instrument used by anglers to locate fish underwater by detecting reflected pulses of sound energy, are the best way to locate kokanee because they travel in large schools, said Ben Otero, sergeant of the Chama supervisory district for the Department of Game and Fish.

“If you are new at this and don’t know the water you will be fishing very well, you should start looking in the main body of the lake and work your way to some known spawning areas,” Otero continued. “If you aren’t sure where the spawning areas are located, you can contact the conservation officer who patrols that lake and ask him/her where most people tend to concentrate their snagging efforts during the special snagging season.”

Snagging is a method of fishing that entails catching a fish using hooks without the fish having to take the bait with their mouth. This is achieved by pulling a treble hook through the water very quickly in short bursts with the intention of piercing the fish’s flesh with the hook. Snagging season in New Mexico runs anywhere from October 1 to December 31 depending on the location. With the exception of snagging season, the best months to catch kokanee are May, June and July. 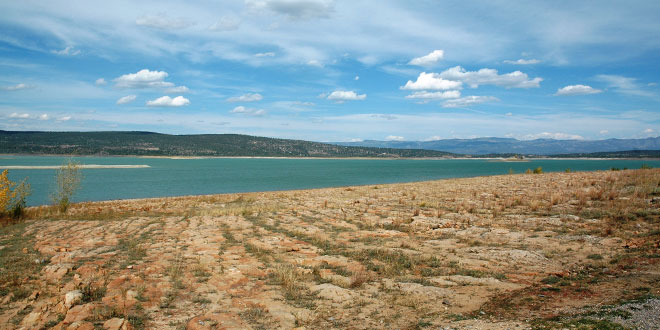 Although most salmon lures on the market will catch kokanee, flashy lures are the most commonly used. Kokanee attack flashy lures because they feel like they are intruding on their space. According to some veteran kokanee fishermen, adding corn to your lures will also increase your odds of catching one of these fish.

One of the most popular kokanee lures is squid spins. Squid spins are hoochies with spinner blades attached to the front of them. Adding dodgers and flashers to lures is also very popular because they are reflective and shiny and can draw fish to your lure. If you plan on using a dodger or flasher, make sure that you do some research on where they should be placed in reference to the lure as this can make all the difference.

Downriggers, the most popular way of fishing for kokanee, are used to lower the fishing line and lure to a desired depth. Without a downrigger, it can be tough to keep lures at these desired depths. Although downriggers can increase your odds of catching kokanee, they are not required.

For those without access to a downrigger, there are charts that show you what your approximate depth will be trolling at certain speeds based on the amount of weight being used. Once at the desired depth, you will want to concentrate on your trolling speed. According to many folks, kokanee seem to react better to lures at speeds of .9 mph to speeds as fast as 2 mph.

For non-snagging fishing, an ultra-light bait casting rod and a good bait casting reel with 6-7 pound test line is a great place to start if you need to purchase a rod and reel. However, there are thousands of rods and reels on the market today and a person should choose what they are the most comfortable with. As time goes on and you gain more knowledge, you can always change to something that fits you and your needs.

For snagging: fishing tackle is pretty straightforward. The two things that you are going to need is a stout fishing rod with at least 10-20 pound test line and some 5/O snagging hooks. From here, it’s all about the technique of casting the snagging hook as far as you can into the lake from the shore, letting it sink for a few seconds and then jerking the hook until you hook a kokanee or the hook reaches the shore, whichever comes first.

Maybe the simplicity of the fishing technique and the limited tackle required is the reason snagging kokanee in New Mexico is so popular.