Did you know that there is a special bird in our state that uses an underground burrow?

The burrowing owl is the only owl in North America that nests exclusively underground. 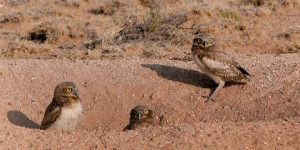 Above: In areas where food is plentiful, burrowing owls can be found in greater densities and are most commonly associated with prairie dog towns. Burrowing owls will use burrows vacated by other animals, but few of those can match the craftsmanship of prairie dogs.

These unique owls are less than 10 inches tall. They weigh about as much as a baseball, have brown and white feathers, white “eyebrows” and throats, long legs and bright yellow eyes.

Burrowing owls can be found throughout our state during breeding season (March through October), and some spend the winter in southern New Mexico. They are uncommon but can be found in a variety of open habitat types—grassland, savanna, desert scrub, agricultural and even some urban areas.

How do burrowing owls build their burrows? “The western subspecies of burrowing owls that we have in New Mexico rarely dig their own burrows,” said Erin Duvuvuei, nongame avian biologist at the Department of Game and Fish. “They typically use abandoned burrows dug by fossorial (burrowing) mammals, such as prairie dogs, ground and rock squirrels, badgers, foxes and coyotes,” she said.

Sometimes, they excavate—or dig—their own burrows by using their beak and feet to dig and scrape soil.

Burrowing owls collect trash, bones, and mammal dung and place at burrow entrances. Some owls line burrows with feathers, grass and dung. At first, researchers thought the dung was used to mask the scent of the eggs and young owls inside the burrow from predators, but this is no longer thought to be true. The materials at burrow entrances may be used to show that the burrow is occupied, and dung attracts dung beetles, which the owls eat.

Burrowing owls lay seven to 10 white eggs; the female owl incubates the eggs inside the nest chamber for about 30 days, and the male owl brings food to her and the chicks once the eggs hatch. About one to two weeks after the eggs hatch, both the male and female need to hunt and bring back enough food to feed the chicks.

Chicks can be seen standing at the burrow entrance at about two weeks old, and they soon start running, hopping and flapping; some young can fly and leave the burrow at about six weeks old, but it takes longer to become strong flyers and good hunters. 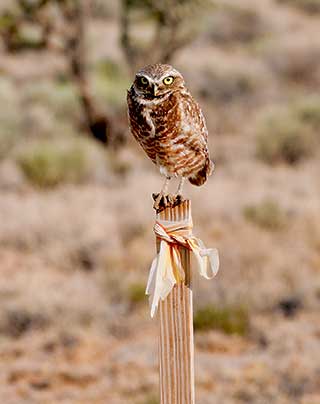 Above: The burrowing owl was nicknamed the “howdy bird” because it seemed to be greeting people by bobbing its head up and down. Although it appeared to be a welcoming gesture, it is actually an act associated with agitation. Department photos by Dan Williams.

Other interesting facts about burrowing owls

What do they eat? A lot of insects, as well as other arthropods (scorpions and centipedes), mice, voles, ground squirrels, small birds, lizards, snakes, frogs and toads.

How high can they fly? During courtship flights, burrowing owls (usually males) are reported to fly up to about 100 feet, hover briefly, and then drop from the air quickly. While hunting, they typically fly low to the ground.

What kind of sounds do burrowing owls make? Burrowing owls are not particularly vocal, but they make a variety of sounds. The most common sound is a two-note “coo-cooo” by males during courtship and defense of their territory. Young owls make an “eep” sound as well as a raspy hissing sound that sounds very similar to a rattlesnake rattle and might scare potential predators away from the burrow.

What else are burrowing owls called? The scientific name for burrowing owls is Athene cunicularia. Burrowing owls often stand at their burrow entrance and bob when approached by humans, so cowboys and pioneers called them “howdy owls” – they thought this behavior looked like a friendly greeting.

What should I do if I see a burrowing owl? Grab some binoculars and watch quietly from a distance. Please don’t approach too closely or disturb these unique owls!

Hello, my name is Trevor Nygren. I am a conservation officer for the New Mexico Department of Game and Fish, currently stationed in Cuba. Although I have only worked for the department for about two years, I have been fortunate enough to be a part of the family my entire life. 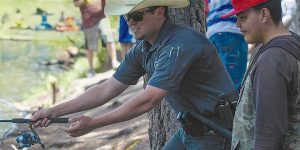 My favorite subject in high school was math because it was something I was always good at. However, when I attended college at New Mexico State University, majoring in wildlife sciences, I soon realized how much I enjoyed the biology classes. My favorite class was mammalogy, the study of animals such as deer and elk. I not only realized that these classes were challenging, but very interesting and fun at the same time.

While attending college, the department hired my older brother, Travis. Travis is currently a conservation officer stationed in Capitan. Now I not only look up to my dad, but to my brother as well.

A conservation officer job is unique and every day is different. We get to do a lot of different and fun stuff but our main priority is to help conserve and
protect wildlife.

Identify the name of seven New Mexico rivers by matching each with its corresponding number: 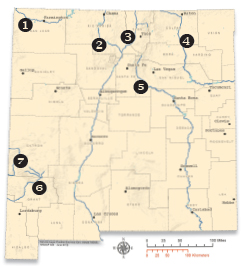 Woolly bugger, Parachute Adams, Elk hair caddis Fishing flies have some pretty strange names. Here are six flies you can use to fish in New Mexico’s rivers. Can you match the fishing flies with their correct names? 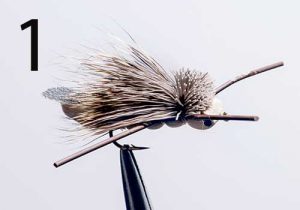 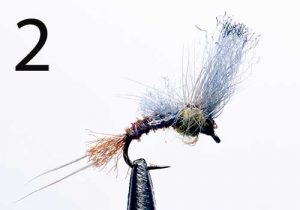 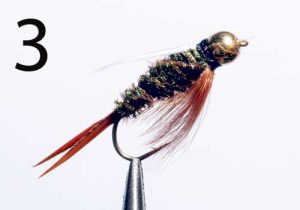 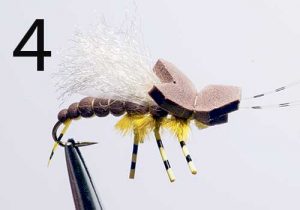 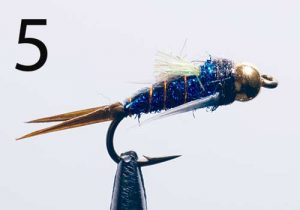 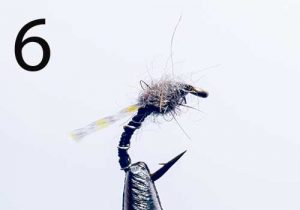 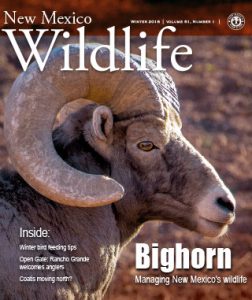