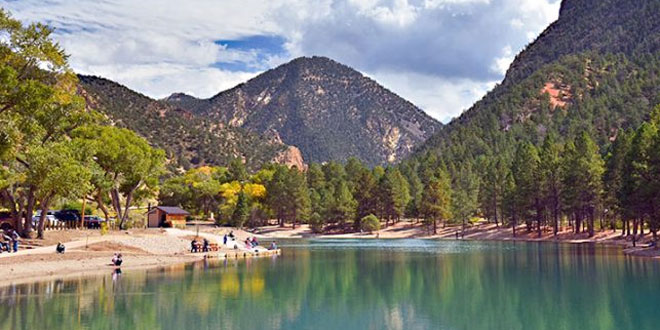 Following the loss of a mine that sustained the Questa, New Mexico economy for years, the small village needed to look in a new direction. As it turned out, a quick peek outside a window provided a potential solution: outdoor recreation.

Above: Eagle Rock Lake and the Red River near Questa have undergone renovations town officials believe will help boost an economy impacted by the closure of the longtime Chevron molybdenum mine. The town is in an area that provides some of the best outdoor recreation in the state and officials hope to capitalize on outdoor recreation activities, including fishing. NMDGF photo by Karl Moffatt.

That transition recently received a boost as the New Mexico Department of Game and Fish partnered with Chevron Mining, Inc., Trout Unlimited, Questa Economic DevelopmentBoard, the Bureau of Land Management, and U.S. Forest Service on a fish habitat improvement project at Eagle Rock Lake and the Red River.

The project, which ran over $800,000, involved installing large boulders and tree trunks as well as reconfiguring the streambed to increase pools and create better places for fish to live. Gravel bars were built to increase river channel sinuosity, and new trails and bridges were developed to improve angler access.

While improvements were being made to the river reaches, Chevron was busy dredging and relining adjacent Eagle Rock Lake. The river and stream project were connected by a new trail system that created a unique angling opportunity.

The nearby Red River that feeds the lake received instream habitat improvements along with riverside trails, footbridges, and other park amenities.

“This is a real plus for us as we transition froma mining-based economy to one more focused on outdoor recreation and tourism,” said Alberta Bouyer, Questa’s tourism director of the project.

“It’s a really nice, aquatic park where folks can fish and have fun in a beautiful mountain setting,” said Eric Frey, sport fish program manager for the department.

The longtime Chevron molybdenum mine at Questa, which sustained the local economy for generations, shut down for good in June 2014 due to poor market conditions.

The effort makes sense considering Questa is located near the Rio Grande del Norte National Monument and the Hondo/Columbine Wilderness. The Valle Vidal, Costilla Park,and Latir Peak Wilderness are also nearby as well as much of the Carson National Forest.

“We’re a small, historic village surrounded by unspoiled wilderness and that’s what makes us unique,” Bouyer said. “This project will really help as we work to promote ourselves as one of the best fishing, hiking and camping destinations in the state.”

“These two projects will tie in nicely and make the area more attractive to visiting anglers and help promote tourism,” Frey said.

Fly shop owner and Trout Unlimited member, Nick Streit, of Taos Fly Shop agrees. “It’s going to be a popular place,” he said. “We’ve been working on this for years and it’s exciting to see the finished product.”

As a result, the fishing in the area can’t be beat.

The Red River has rebounded nicely from poor habitat conditions and now supports a resident population of feisty brown trout and is regularly stocked with rainbow trout from the hatchery.

The nearby Rio Grande Gorge within the national monument continues to provide anglers with excellent fishing for wild rainbow and cutthroat trout, while the Rio Costilla in the Valle Vidal boasts some of the best open-meadow fly-fishing for native cutthroat trout in the state.

Funding for the Eagle Rock Lake and Red River improvements came from the sales of fishing and hunting licenses and proceeds from habitat stamps purchased by hunters and anglers along with their licenses.

Apple Mountain Construction of Estancia and Riverbed Engineering of Albuquerque handled the design and construction of the river improvements. Chevron Mining, Inc. took care of dredging and lining the lake on U.S. Forest Service land.

For more information about Questa and what it has to offer, visit www.questa-nm.com. Anglers can find the latest fishing conditions from Eagle Rock Lake and Red River in the department’s weekly fishing and stocking report found online at wildlife.state.nm.us/fishing/weekly-report.