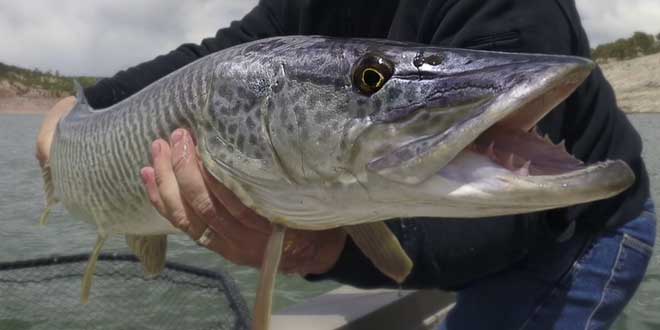 Tigers are cleaning up

When the trash piles up, there’s nothing like having a tiger to clean things up.

In 2004, when “trash” fish such as white suckers and illegally introduced goldfish provided less than an ideal angling experience at Bluewater Lake, the New Mexico Department of Game and Fish decided it was time to bring in the tigers to clean up.

Tiger muskies, that is.

A relatively long-lived, large predatory fish, tiger muskies have improved angling opportunities that will continue for years as stocking of these fish resumed in 2015 following a three-year hiatus.

“We wanted to allow some time for the population to thin,” said Eric Frey, sportfish program manager at Game and Fish. “The time was right to begin stocking again.”

Because tiger muskies are sterile, a continuing influx of the fish is necessary to maintain a population and Game and Fish acquires fingerlings, fry or eggs from out-of-state sources.

“It’s important to ensure there aren’t large gaps in the year classes with fish species that we manage in New Mexico and these fish were last stocked in 2012,” said Shaun Green, coldwater fisheries biologist with Game and Fish.

A benefit to the exceptional clean-up effort by the tiger muskies is that, for the first time since the spring of 2014, the department resumed stocking rainbow trout at Bluewater.

You put the two together and Bluewater Lake has become a fishing hot spot.

“They’ve done their job,” Green said of the muskies. “In the process, Bluewater Lake has become a premier New Mexico destination for anglers wanting the challenge of landing tiger muskies.”

Matt Pelletier of New Mexico Muskies, Inc., and a fishing guide at Bluewater Lake, knows about the popularity of these fish and offered some advice.

“For best results, 6- to 12-inch lures work wonderfully and sometimes you can land a fish on 15- to 20-inch stuff,” he said. “Whatever you choose, make sure it’s rigged to an 18- to 30-inch long steel leader. You’ll also need heavy line on your spool, 40 to 80-pound test, depending on the size of the lure being used.” 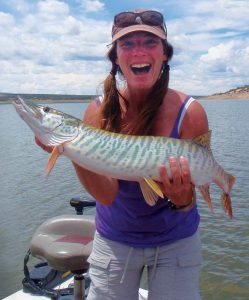 After a short hiatus, stocking of tiger muskies resumed at Bluewater Lake in 2015. The muskies, which are sterile, were introduced into the lake to help control populations of white suckers and illegally introduced goldfish. The introduction created a whole new adventure for anglers looking to land one of these large, predatory fish. Photo by Mark Sawyer.

Once hooked, there’s some cautionary steps involved for both the fish and angler. Tiger muskies have some large teeth and anglers need to be careful to avoid potential injury. However, despite their size and teeth, these fish can be somewhat temperamental.

While the possession and bag limit is one tiger muskie 40-inches or greater, most practice catch-and-release. As a result, it’s important to become educated before heading to the lake.

Delayed death of a fish can occur when not properly released or handled, especially when lake temperatures are high.

A Game and Fish instructional video on protecting yourself and the fish can be found at youtube.com/watch?v=QgnXbndViB8 and a brochure on tiger muskies can be found on the department website, www.wildlife.state. nm.us.

While tiger muskies can be caught year-round, it’s best to avoid the warmer months. When water temperatures exceed 70 degrees, which is typically in July and August, there are reduced oxygen levels, making the muskies a bit lethargic and they aren’t as actively feeding.

The record tiger muskie for Bluewater Lake is over 50 inches and 38 pounds. However, these fish grow quickly and the record’s been repeatedly broken.

While the tiger muskies are doing their job, it is important not to compound the problem, and those visiting the lake should be sure to check the regulations for legal bait.