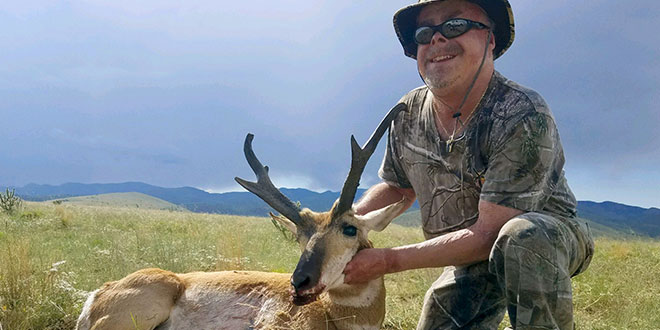 Blind hunter sets no limits for himself

With the help of good friends and adaptive equipment, Mike Sanders goes after big game

When Mike Sanders lost his eyesight in an industrial accident at an oil refinery
15 years ago, he thought he would never hunt again.

Today, he will hunt anything he can get a tag for in New Mexico. The hunting trophies covering the walls of his living room are a testament to this. He has probably hunted every single animal available for harvesting in his home state and across the west. Elk, deer, antelope. Barbary sheep. Oryx on White Sands.

A bison greets visitors in the foyer of his house.
“That little buck above the TV was my first mule deer after I came home from the hospital,” he tells a couple of visitors sitting around his kitchen table in Jamestown, east of Gallup off I-40, where he lives with his wife Michele.

The couple had just married shortly after the accident.

Sanders had been working as an outside operator at a refinery when a pump exploded. He was 43 at the time.

“I was injured on April 8, 2004,” he begins the story, noting that 80 percent of his body was burned in the accident. “Spent 16 months in three different hospitals. I lost my eyesight in recovery. I lost the fingers on my left hand. I was a left-handed shooter. So I had to switch.”

He had considered himself ambidextrous but really, at the time of the accident, mostly left-handed.

Sanders is one of thousands of disabled hunters in the state who hunt with a mobility impaired (MI) certification, which is required prior to applying for MI-only pronghorn, oryx, elk or deer hunts.

As a result of his injury, Sanders says he sticks to hunting big game. The animals are larger, easier to target. He doesn’t bother with small game. “I don’t mess with them,” he says matter-of factly. “They won’t stand still long enough for me to get on them.”

But Sanders doesn’t dwell on that. He has a freezer full of meat and memories and plenty of hunts to plan.

Sanders came home from the hospital the summer of 2005. He started therapy. He started coming to terms with his ability to hunt. He expected he would sell all of his scoped rifles because without vision, he didn’t have any way to shoot them.

A few years later, his buddy Joe Chepin from the refinery came over to have a beer and declared he was going to put Sanders in for a few hunts.

“He put me in for antelope, oryx, elk, deer and javelina,” Sanders says.

They lucked out. They drew four hunts. Antelope, javelina, elk and mule deer.

Well, how are we going to do this now? Sanders asked.

“So he and some of his buddies at the refinery looked for equipment to mount on my scope and they found a gadget called a trophy shot,” Sanders says.

They went antelope hunting in southwestern New Mexico on public land next to the Double H Ranch. It was Sander’s first hunt after the accident.

“We get into these antelope,” he remembers. “And I shot at one, missed him. Shot at another. Missed him. The third was 230-something yards and we dropped him in his tracks… with a .308 Winchester.”

Since then, he has switched from being a left-handed shooter to a right-handed one.

As a mobility-impaired hunter, Sanders said he mostly sits in a truck and hunts from there. His spotter, a hunting buddy, becomes his eyes, using the scope for him, watching on a laptop computer what Sanders is not able to see. The spotter tells him how to move, makes sure nobody’s around, that he’s shooting in a safe direction. “Right, right, right, left, left, right… up, up…” 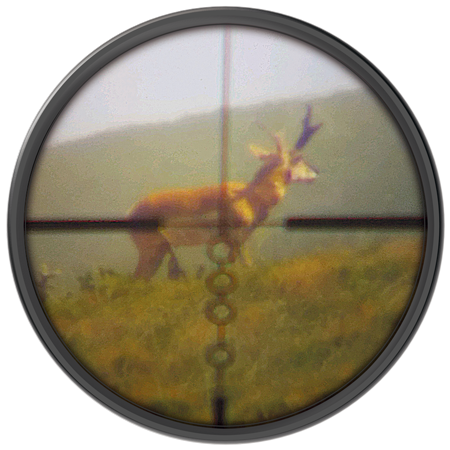 If they say, “hair to the left” or “hair to the right,” Sanders knows he’s getting close to the next command: “gun.”

If he misses, it’s not the spotter’s fault, Sanders says. He assumes he either jerked the trigger or pulled it too soon.

Sanders shoots and listens for the distinctive thud of the animal falling, the sound one hears after a bullet strikes.

When an animal is down, he approaches it. He uses his hands to understand what he just harvested. “I’m feeling what he’s like,” he says. “I can almost judge how tall they are, especially antelope. I can almost tell the length, I can feel how big the horns or antlers are, how wide they are.”

He remembers a recent hunt. “That one we shot had two little bumps on the back horn,” he recalls.
“It was almost as if it was trying to grow another cutter on the backside.”

Michele finds it difficult not to jump up and down and hoot and holler when her husband hunts, she says.

With people like her in his life getting him back out again, Sanders insists he’s not the biggest inspiration in his hunting party.

“You think I’m an inspiration, but it takes all these friends, folks and family to inspire me as well because they’re willing to go out and hunt with us,” he says.

He knows it’s not easy to get friends to do this, he says. They have to make arrangements with their families, go away from them, take time off from work. They deal with his frustration. They don’t get paid. They do it just to help.

And he can be grouchy at times, he says. He used to be so independent, he remembers. He gets frustrated that people have to do difficult things for him. “Little stuff I can handle,” he says. “Difficult things… it’s kind of hard.”

But there are so many more hunts to come.

He has a bucket list. He’s already hunted oryx on White Sands but would like to go again. He would like to hunt a mountain lion. He wants to get out of the truck.

In his mind, there are so many possibilities.

“I want to sit in a blind somewhere,” he thinks aloud, “and maybe have my buddy call in an elk or something like that.”