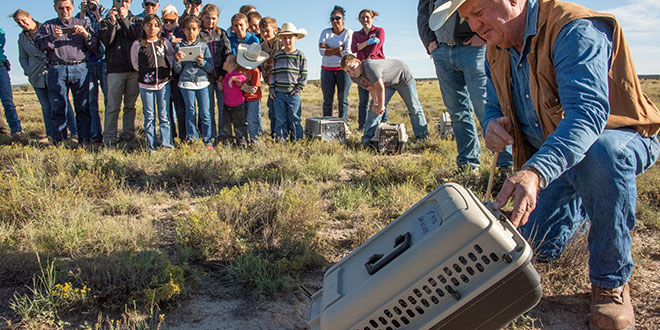 Hiding inside small pet carriers in the back of a U.S. Fish & Wildlife Service truck, eight very rare animals that once thrived in New Mexico waited to go home.

Above: Greg Moore releases the first of eight black-footed ferrets into a prairie dog burrow. Department photo by Martin Perea.

It was a sunny, late September afternoon when wildlife biologists, conservationists, ranchers and local residents gathered on the side of a dirt road at the Moore Land and Cattle Company ranch east of Wagon Mound for the rare opportunity to witness the reintroduction of the black-footed ferret to New Mexico. The ferrets were driven down from Fish & Wildlife’s National Black-Footed Ferret Conservation Center near Fort Collins, Colo. where the animals are raised in captivity and prepared for release at sites throughout the interior western United States.

The release location was only the third ever in the state; several years have passed since the last reintroduction attempt at the Vermejo Park Ranch in Colfax County, not too far away from this 500-acre black-tailed prairie dog town. 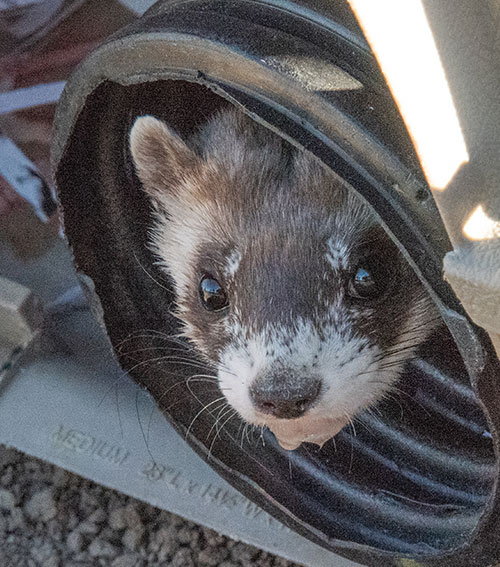 And the large prairie dog population on Moore’s ranch means ferrets should be able to thrive there. Black-footed ferrets rely almost exclusively on prairie dogs, for food and for their burrows, which provide denning and shelter sites; the presence of a predator species would keep the prairie dog population in check, enable ranchers to avoid shooting or poisoning the animals and possibly force them to move elsewhere before they further damage the land by creating too many burrows.

Above: A black-footed ferret inside a crate awaits its new home at the Moore ranch. Department photo by Martin Perea.

“Is the prairie dog the villain or is it just getting used by a lot of other species, and then the prairie dog gets the blame?” said Moore, who has owned the ranch since 1971. “Maybe the little ferrets could make them move around so they don’t sit in one spot.”

Read more about the black-footed ferret release in the Spring 2019 issue of New Mexico Wildlife!