Biologists are branding fish in a quest for answers

Following the old adage, “there’s always a bigger fish,” New Mexico Department of Game and Fish biologists are collecting information to determine the size at which catfish have the best chance to survive. 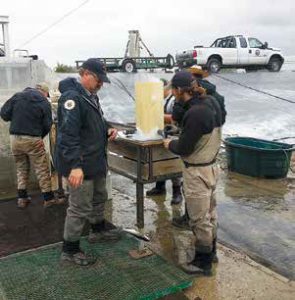 Simply stocking thousands of catfish might draw anglers to a water, but it doesn’t always translate into an enjoyable experience, especially if those fish are being quickly consumed by other fish.

Shawn Denny, a Game and Fish warm water fisheries biologist in Roswell, is part of a group trying to enhance catfish survival rates and, in turn, improve the experience of anglers visiting warm water locations.

“We’ve stocked thousands of small channel catfish with a low survival rate,” Denny said, adding that the research is not associated with the big catfish program. “If they don’t survive, then raising and stocking small fish is not an effective use of funds.

“In addition, stocking a large, expensive fish is a waste of funds if we can raise smaller fish and have them grow naturally.”
The question Denny and others are trying to answer is the ideal size of the fish being stocked, but trying to monitor fish is no easy task.

Personnel considered a number of options including electronic markers (PIT tags) and anchor tags. But, for reasons such as expense, they were each shuffled to the side.

Branding, however, isn’t overly costly and, during surveys, the fish will provide the information needed to make effective decisions.
However, a hot branding iron isn’t something you’d use on fish. Instead, it’s a method known as cold branding, which has been used on livestock and at fisheries since the 1960’s.

“You’re gonna what?” Denny said of comments received when he spoke to a local welding company supply store when he asked about the need for some liquid nitrogen to freeze-brand catfish.

The process was used to mark channel catfish produced at the Game and Fish warm water hatchery in Santa Rosa.

Before going full-scale, biologists tested the method on a number of fish to determine short- and long-term mark retention.

It worked, and using a variety of marks ranging from dots and bars to angles, biologists began branding large numbers of fish prior to stocking. During sampling, biologists will know the size of the fish when they were stocked and that they weren’t wild born.

“Now we’ll know if they were stocked and how much they grew during an established time frame,” Denny said. “We’re also able to determine a specific growth rate and see if it is in an acceptable range.”

Denny said several factors impacting survival rates are well known, such as cold weather stocking and predatory fish. Where they are present, largemouth bass and tiger muskies are known to have significant impacts on small catfish. 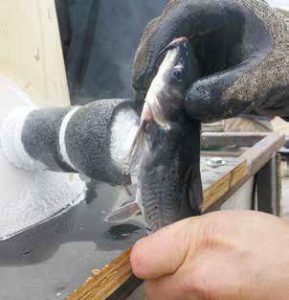 Pinpointing the ideal size, however, has proven elusive.

Denny is looking at factors such as stock-ing fewer 7-inch fish with a better chance of survival than thousands of 3-inchers that are easy prey.

Over the next year, biologists will be surveying the stocked catfish using baited hoop nets. Initial research suggests, in locations where predatory fish such as largemouth bass and northern pike are present, the survival rate for stocked channel catfish at 7 inches is much better than at 4 inches. The effort, however, is ongoing in order to obtain the necessary data to make science-based decisions.

“We’ll know how quickly they’re growing,” Denny said. “It is not effective to stock fish if it takes 10 years to reach a harvestable size.”

And, when they reach that ideal size, the bigger fish won’t have the same impact and those wishing to bring catfish home for dinner will have a better experience on New Mexico waters.