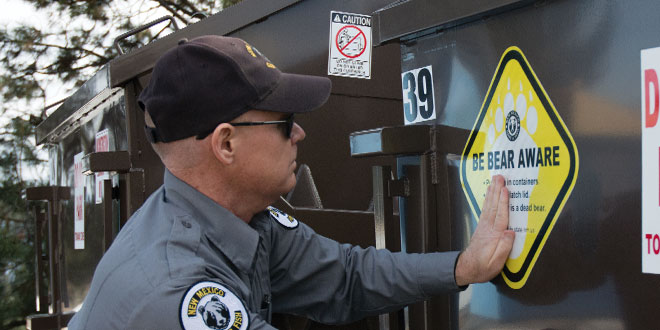 There is a difference between unintentional and intentional or negligent feeding of wildlife. Unfortunately, the end result is often the same.

Bears are notorious for becoming quickly conditioned to human surroundings and habituated to human foods after consuming enticing treats found in garbage. Following such rewards for brazen behavior, bears begin associating humans with food, and as the familiar slogan warns: “A fed bear is a dead bear.”

Above: Bob Osborn, assistant chief of private land programs for the New Mexico Department of Game and Fish, affixes a “Be Bear Aware” sticker to one of the new bear-resistant dumpsters installed at the Los Alamos Medical Center. NMDGF photo by Zen Mocarski.

Bears that forage on human-derived resources are a problem. Conversely, bears foraging on natural foods, such as acorns or berries near humans is not as worrisome.

“For years, people in bear country have heard about the importance of securing trash and keeping wildlife wild,” said Rick Winslow, bear and cougar biologist for the New Mexico Department of Game and Fish.

A few have learned tragic lessons, such as a woman in Colorado, who after years of feeding bears and other wildlife was killed by a bear. Four bears were euthanized as a result, two prior to the attack because they became aggressive toward humans and two others following the fatal incident.

Bear biology is governed by food availability, so bears naturally gravitate to an easy food source, such as the contents of dumpsters. A person visiting a dumpster that is not bear resistant at the wrong time could be faced with a dangerous encounter with a powerful animal. 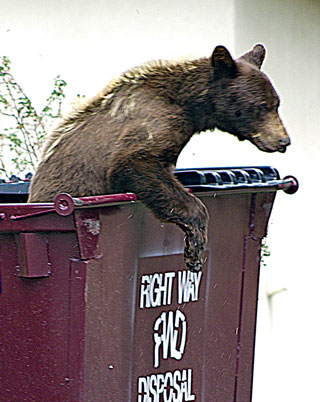 Black bears find human trash appealing and they are quite adept at getting into traditional dumpsters. Once an easy food source is discovered, bears will return to the same location to feed and relocated bears have been known to travel long distances to return to an easy food source. NMDGF photo.

In an effort to minimize the chances of such interactions and to protect bears, the Department of Game and Fish collaborated with the cities of Raton and Los Alamos last year to install a number of bear-resistant dumpsters.

The project happens at a time when Winslow anticipates an increase in bear activity.

“We’ve had three consecutive average to above-average years of precipitation and the vegetation has responded by producing abundant natural forage for bears,” he said. “That usually equals good bear reproduction, which means more bears on the landscape competing for sometimes seasonally finite resources.”

“These projects are beneficial to bears and people,” said Bob Osborn, assistant chief of private land programs for Game and Fish. “Human food has the potential to place both bears and humans in harm’s way. If bears can’t access the dumpsters, hopefully they’ll remain in the forest and forage naturally.”

The Raton area has experienced problems with dumpster-diving bears in the past and worked to find a possible solution.

“The city came up with a bear-resistant trash dumpster design that worked with its trash-collection vehicles,” Osborn said.

The city and Game and Fish worked together to get 650 of the dumpsters built and distributed. The department contributed about $382,500 and the city provided another $213,000 to make the project possible.

“The new containers have provided numerous benefits, including decreasing operating costs associated with cleanup, a cleaner city and a healthier environment for the area’s wildlife,” said Scott Berry, city manager for Raton.

For Game and Fish personnel, protecting one of the state’s valuable resources made the purchase worth the cost.

“Nobody enjoys euthanizing a bear deemed a danger to the public,” Winslow said. “It is done in the interest of public safety. If bears don’t become habituated to human food, it reduces the potential for unwanted encounters.”

Later in the year, a call came in to Game and Fish from the Los Alamos MedicalCenter about regular visits from bears to dumpsters on the property. The call resulted in a collaboration between the department, medical center and town of Los Alamos.

“The bears had become regular visitors and we were concerned about the bears and potential issues with people,” said Carlos Branch, director of plant operations at the medical center. “This will dramatically reduce litter and risk.”

The litter is often overlooked, but it had become a problem in Los Alamos. Angelica Gurule, environmental services manager for the county, said locations were identified around the town that involved a lot of food waste.

“The community is happy about getting these dumpsters in place,” she said. “We’ve had issues with bears dragging trash into the canyons and making a mess.”

But the safety of the public and well-being of wildlife are paramount.

“This will help address the public safety aspect of bears in areas of high human use,” Osborn said. “Human-wildlife conflicts often don’t end well for wildlife. Hopefully this will encourage bears to remain wild.”

Bears are highly opportunistic omnivores and their diet changes from season-to-season depending on what is available. Grasses and forbs, acorns and piñon nuts, berries, roots, insects and their larvae, carrion and juvenile deer and elk are some of the staples of a bear diet in New Mexico.

“We want them to be wild animals,” Winslow said. “They shouldn’t rely on human food. Research indicates that bears relying on human food become more nocturnal when they really should be most active around dusk and dawn. In addition, they can have shorter life spans, shorter denning periods and exhibit lower cub survival relative to bear populations that rely solely on natural foods.

Whether it be intentional or not.

Unfortunately, not all encounters are welcomed, so the lab is taking steps to protect personnel and bears.

“From a visibility point of view, 2016 was quite active with bears around the facility,” said Chuck Hathcock, wildlife biologist for the laboratory.

Hathcock said several of calls were received from lab employees spooked by bears at some dumpsters around the facility, but two cases accelerated the process of getting bear-resistant dumpsters in place.

One case involved police wounding a bear that had been hanging out at the Los Alamos Medical Center. It ventured into the national laboratory area before being euthanized. The event culminated in the closure of hiking and nature trails around the lab. 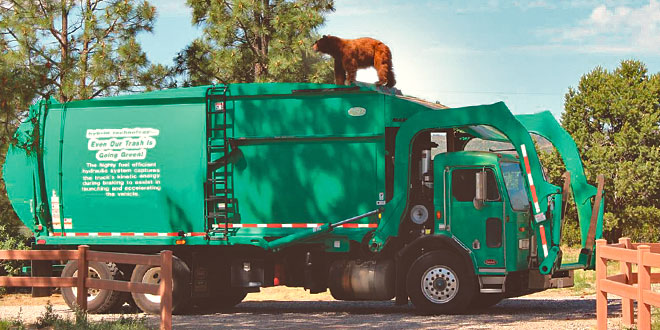 A second incident involved a facility truck loading trash from a dumpster not knowing a bear was foraging inside. The truck backed up to some trees and the bear climbed down and disappeared into an adjacent canyon.

The facility already had replaced 20 dumpsters, but approximately 180 remained easily accessible to bears.

“That incident reinforced the need for these dumpsters,” Hathcock said.

Employee safety and the welfare of the bears took center stage. Approximately 50 more bear-resistant dumpsters have been placed at locations with the highest bear activity. The desired outcome is for bears to forage naturally in the forest.

“This is about employee safety,” Hathcock said. “That’s always a priority. But you also don’t want to have to kill the bears.”

The national laboratory is absorbing the entire cost of the dumpsters, with a goal of replacing them all.

“This is a step in the right direction,” Hathcock said. “They aren’t cheap, so it’s a budgeting exercise. I’m happy with the 50 we’re getting now.”

“The more a person knows about bear behavior and why the bear is where it is, the more they can avoid a potentially negative encounter,” Winslow said.

He said bears most often will avoid interactions with people. Making a lot of noise will let a bear know humans are in the area before there is a confrontation.

“Wear bells, sing a song to yourself or go out with other people,” Winslow said. “If there is an encounter, shout at the bear and don’t allow it to get the upper hand right away. Don’t run. Instead, back away slowly with your arms out wide to make yourself look bigger. Running can trigger a bear’s predatory instinct, possibly causing an individual to be viewed as prey in response.” 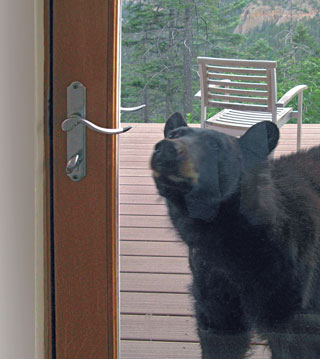 Ways to keep bears alive and you safe

What would you do if you suddenly came face-to-face with a black bear on the trail or in your back yard?