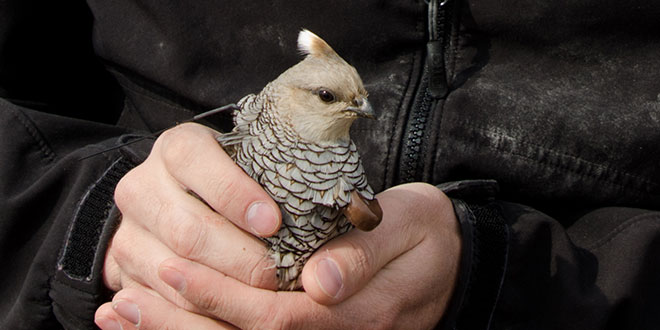 Meet Austin Teague, New Mexico Department of Game and Fish’s Southeast Regional Wildlife Biologist. Austin began his career with the agency six and a half years ago as a conservation officer based out of Clayton. He moved into the regional wildlife biologist position three and a half years ago. Originally from Lubbock and Abilene, Texas, he attended Texas Tech University where he graduated with a bachelor’s of science in wildlife management in 2011. Before working for the department, Austin worked as a wildlife technician in various locations surveying wildlife species such as Lesser Prairie Chickens, Mississippi Kites, Northern Flying Squirrels and Sage Grouse, just to name a few. 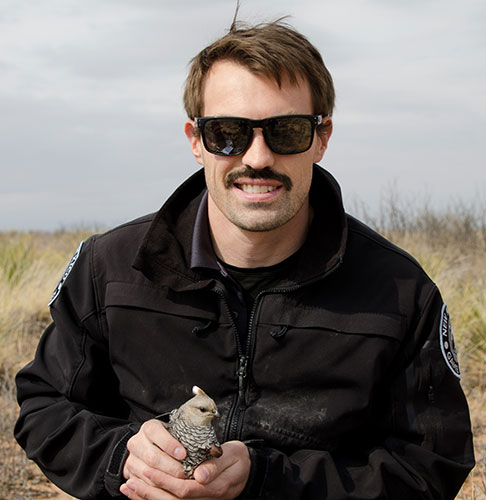 On his days off he enjoys working out and playing soccer for the men’s league in Roswell. On longer weekends he said he likes participate in whole host of outdoor recreation activities including white water rafting and snowboarding. “And I always enjoy attending the Texas Tech Red Raiders’ sporting events,” he added.

?What inspired you to be a wildlife biologist?
I have always had a passion for wildlife and the outdoors. In fact when I was little, I would attend my father’s ornithology (bird) class when he was in college. I guess you could say it has always been in my blood. ?As a biologist with the department what wildlife do you primarily work with, and what do you do?
I primarily work with big game species such as deer, elk and pronghorn, but other species are not forgotten. I am responsible for the coordination and implementation of wildlife management activities within the SE region of the state such as surveys and captures. I provide on the ground knowledge and management assistance to department employees, other agencies and the public and private landowners concerning wildlife populations. I am also a commissioned law enforcement officer and, as time allows, I assist our conservation officers in enforcing game and fish laws and regulations. ?What is the best part of your job as a biologist?
There are many things I love about my position, but my personal favorites are flying big game surveys and being involved in the wildlife captures. ?What advice would you give to someone wanting to become a wildlife biologist?
Go to school and get your degree, and while you are in school try to be as involved with wildlife as possible. Being a student member of the wildlife society or other organization, and working as a technician for the graduate students at your university are both great ways to get involved. ?Any interesting or fun stories you have from your career with the department?
A few years ago I was on an elk calf capture, and broke my arm when I fell chasing an elk calf. I was inches away from capturing it running full speed, then I tripped and my arm landed on some lava rock and I broke the radius bone in my wrist. Luckily after I fell, the elk calf bedded down and my supervisor was able to catch it. I did not know my arm was broken until I attempted to get our capture supplies out and my arm wouldn’t work the way I wanted. I did not know my arm was broken until I attempted to get our capture supplies out to work up the elk calf—attach an ear transmitter and take size measurements—and my arm wouldn’t work the way I wanted. I guess this story isn’t all that fun, but I do look back on it and laugh, especially because almost everyone on the capture witnessed me do it.
Photo of Austin holding quail: Austin Teague, New Mexico Department of Game and Fish’s Southeast Regional Wildlife Biologist. Department photo by Cody Johnston.
Share