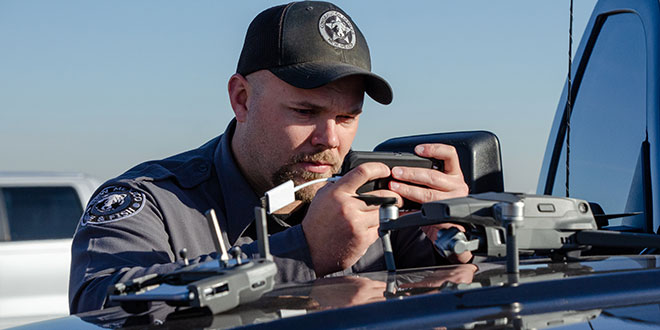 If we go back more than 40 years ago to 1977, the Department of Game and Fish began to realize that poaching was a wider problem than they initially suspected and started to look into ways of stopping poachers.

With that in mind, they also realized that what they were missing was help from the public. And the public was definitely interested. There were many New Mexicans determined to bring to justice the poachers who were stealing their wildlife. Fast forward to today and that program, Operation Game Thief (OGT), is still bringing those poachers to justice with the help of citizens who can remain anonymous and earn a cash reward for poachers who are convicted.

In fact, it was an anonymous OGT tip that helped bring this poacher to the attention of conservation officer Andrew Jolliff last year.

New Mexico Department of Game and Fish conservation officer Andrew Jolliff inspecting some of the equipment he uses during investigations. Department photo by Cody Johnston.

It was December 2, 2019 and Officer Jolliff was performing his normal duties during the hunting season as a state conservation officer, checking for illegal hunters and serving the wildlife and people he took an oath to protect when he received an OGT tip that three mule deer bucks had been illegally killed by a father and his underage son during the November hunting season.

Wasting no time, Jolliff jumped into the case to see if the tip was credible. Searching through the database of hunting license holders, Jolliff did determine that both Robert Husky and his son possessed deer hunting licenses for Game Management Unit 31 but were only valid on private land.

For Jolliff, his next step was to contact Husky. An initial phone call to Husky ascertained that both Husky and his son had been hunting, and both did harvest a mule deer buck each. Husky, however, denied ever killing a third buck. As the story evolved, Husky stated that another individual, Kirby Babb, was the one who killed the third mule deer buck.

With this new information Jolliff had to do some more digging. “I…had my doubts [about Husky’s story] when he was quick to throw Kirby Babb under the bus knowing that I was going to verify,” said Jolliff. With another search of the hunting license database it was evident that Babb did not possess a hunting license, which meant that either Babb had illegally killed a deer without a license or Husky wasn’t telling the whole truth. With the new knowledge in hand, a call was made to Babb, who admitted to possessing the meat from the supposed third mule deer buck but denied that he killed it. In fact, he stated the meat had been given to him by Husky. As an officer, Jolliff is used to people trying to hide the truth from him, and it was his job to use the evidence and his skills to find out the true story.These new facts brought Jolliff back to talking with Husky over the phone. After being confronted with the story from Babb and a little bit of officer intuition and probing, Husky admitted that he accidentally killed a second buck. Instead of alerting an officer, which he was required to do, he took home the two deer he killed and the third his son harvested. With this admission, it was time for Jolliff to visit Husky in person.

Upon meeting with Husky at his home and after some further questioning, Jolliff began to recognize the area where Husky described killing the deer and knew it wasn’t on private land where Husky and his son’s licenses were valid. “While speaking with Robert Huskey about the killing of the deer, I recognized the location of where he had described killing the deer as State Land,” said Jolliff. When Husky showed him the location on the GPS it was confirmed—these deer were killed on public land, near Monument, New Mexico. According to Jolliff, “[I] was not surprised when he pointed it out on OnX Maps.” It was at this point Husky also corroborated the story that Babb told Jolliff and admitted he gave Babb the meat from the third deer.

The real story had finally come out. Husky and his son killed a total of three mule deer and had done so on land that was not open for them to hunt with the licenses they possessed. Jolliff now had what he needed: the confession, the deer meat and heads, and the GPS coordinates. 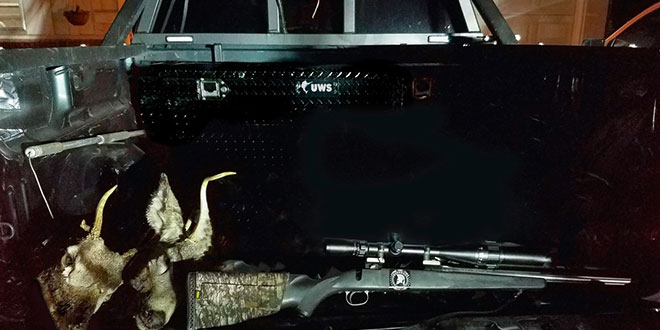 After an OGT tip and some investigating, conservation officer Andrew Jolliff seized the rifle, the heads and meat (not shown), from the illegally killed deer shot by Robert Husky who was later convicted for his crimes. Department photo by Andrew Jolliff.

With that Jolliff seized Husky’s Savage Model 112 rifle, all the meat and the heads from the two deer Husky shot, and later seized the meat from Babb. He was unable to seize the third head since it had already been disposed of by Husky. He then issued five citations and two warnings to Husky for hunting on public property with a private land license, unlawful killing of mule deer, exceeding the bag limit of mule deer, unlawful possession of illegally taken mule deer, an accessory citation for allowing his juvenile son to hunt on public land with a private land license and two written warnings for failure to properly tag. Babb was also cited for unlawful possession of an illegally taken mule deer.

Just over three months later, the court was ready to hand down a sentence and on March 9, 2020, Husky accepted a plea agreement and pled no contest in Hobbs Magistrate Court to one charge each of hunting on public lands with a private land license, exceeding the bag limit and unlawful possession of an illegally taken mule deer.

Thanks to a tip from a concerned citizen and the instinct and hard work by Jolliff, Husky was ordered to pay $1,129 total in fines and court fees and was given 364 days of unsupervised probation. He was also required to reimburse the $500 reward paid by Operation Game Thief for the anonymous tip and $250 of restitution to OGT for the loss of the third deer as a state resource.

In addition, Husky is also awaiting license revocation, meaning he will likely lose his privileges to hunt and fish not only in New Mexico but in potentially the 48 other states who are members of the Interstate Wildlife Violator Compact. Babb was not spared from his role and pled no contest. He received a deferred sentence and agreed to pay $123 in court fees and make a $150 donation to OGT.

Operation Game Thief was created exactly for crimes like these; to stop the people who decided that the law didn’t apply to them and that they could illegally take the wildlife that belongs to all of the citizens of New Mexico. With the continued awareness of concerned citizens, you can help be a part of making a difference for the wildlife of our state, and help assist the conservation officers who everyday make it their job to make sure wildlife is protected for generations to come.