Even for the everyday reader who hasn’t spent his or her time studying wildlife professionally, it’s probably no secret that wildlife species share space and compete for the same use of habitat, whether that is for food, water or shelter. It is also likely that most people would recognize that certain effects on a landscape that are good for one species may not be as beneficial for another.

Habitat and wildlife biologists must study and consider these effects when performing large-scale projects on a landscape. A project that may help one species may make it more challenging for another species while providing unforeseen benefits to another. It’s a balancing act that biologists must evaluate in order to provide the maximum amount of benefit to all. 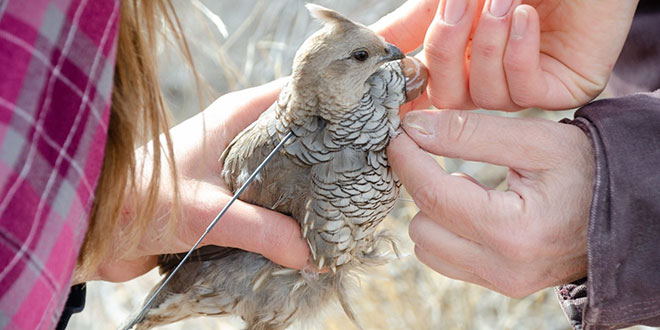 Scaled quail and the lesser prairie chicken are two species that are currently being studied in a multi-agency partnership between the New Mexico Department of Game and Fish, the Bureau of Land Management, Oklahoma State University and Texas Tech University.

It was a bright and warm New Mexico morning, and for Kiera Kauffman of Oklahoma State University, another spring had arrived as she began her morning by heading out on foot to one of her multiple ground traps to check the success of earlier baiting. She hoped that the traps would hold at least one – or preferably, multiple – scaled quail. Kauffman has been coming to the Bureau of Land Management’s Sand Ranch property in southeast New Mexico for multiple years to study these birds as part of her master’s thesis.

Scaled quail are found quite abundantly in this part of New Mexico, and her study involves trapping the birds, getting all of their measurements and fitting them with telemetry backpacks so the birds can be located in the future and researchers can assess how different land management practices affect the quail. The Bureau of Land Management conducts various types of land management practices on this property.

“Scaled quail, compared to other quail species, are pretty understudied,” Kaufmann says, adding that she and her team want to know “how mesquite removals are affecting scaled quail, and kind of figuring out a little bit more of how they respond to management practices.” 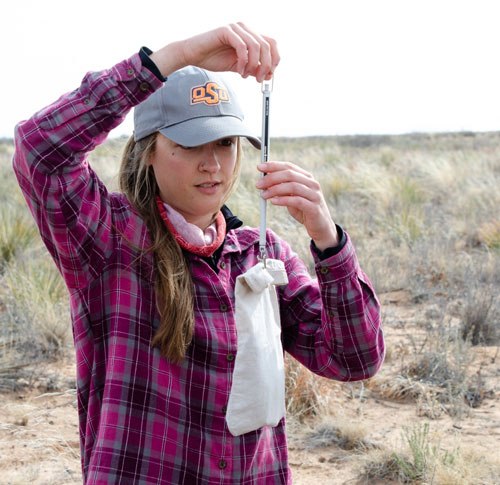 Above: Kauffman weighing a scaled quail in a protective bag. Cody Johnston, New Mexico Department of Game and Fish

Some of these management practices, including prescribed burns and removal of mesquite, are meant to bring about positive population change for species such as the lesser prairie chicken, a species that is considered a Species of Greatest Conservation Need in New Mexico due to its low population numbers. The lesser prairie chicken struggles with breeding when large stands of mesquite trees are found in its habitat. These trees, and other tall structures, provide places for birds of prey to stalk the prairie chicken and therefore impede the success of the birds. Wildlife researchers such as Dr. Blake Grisham, an associate professor from Texas Tech University, have been taking groups of students (a.k.a. future wildlife biologists) from the local Texas Tech wildlife chapter to the BLM Sand Ranch for many years to learn about and study the habits and health of these lesser-known birds.

I joined up with Grisham and some of his students one morning as they arrived to a lek site used by the birds to “boom” – which is a fancy way to say the males go to an open area to dance and make noise, hoping to attract a mate. As part of the ongoing study being done by two of Grisham’s graduate students, who live nearby and spend their summers capturing and collecting data on the birds at the ranch, traps were already set up at the lek site. This meant when we arrived, the students from the wildlife club only had to open up the traps so they were ready to catch birds.

The traps are fairly simple, with a trap at one end and drift fences in a “V” shape that create a funnel leading into it. They work by taking advantage of the distracted birds’ tendency to run along the edge of the fence and get funneled right into the trap.

Now that the traps were open, it was just a waiting game. 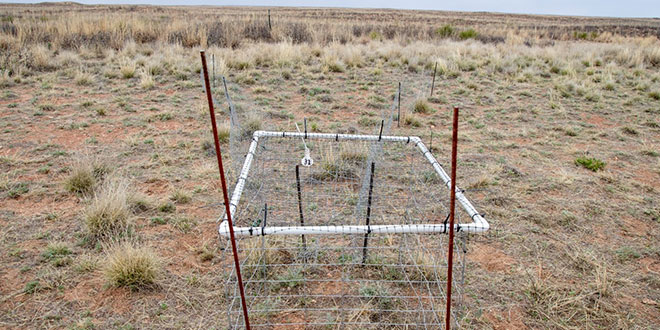 Above: A funnel trap used by Grisham and his students to catch lesser prairie chickens. Notice the “V” formed by the fences in the background that create a funnel into the trap. Cody Johnston, New Mexico Department of Game and Fish.

We sat in the truck, peering out through binoculars and waiting in anticipation for the birds to arrive. As the sun came up, the birds appeared, right on schedule, and began to perform their show. The males danced, displayed their plumage, “boomed” and made their calls for a mate. They moved all around the traps, with one bird standing on top of a trap to observe his surroundings; however, none of the birds that morning would be distracted enough to go into a trap. Maybe 30 minutes into watching, something must have alarmed the birds, because they all flew away.

Thinking we wouldn’t see any more birds, I was enthusiastic when I was told that even when these birds get scared off their lek, they usually return soon after. In an attempt to entice them back, Grisham played an audio recording through his truck’s speakers of prairie chicken calls and “booms.” Now, hearing wildlife called over the sound system of a truck was a first for me, but he said it did seem to work on occasion. Unfortunately, this turned out not to be one of those times and the birds did not return. However, luckily, we heard that another group of his students and a New Mexico Game and Fish wildlife biologist, Austin Teague, had captured a prairie chicken in a different location, so we quickly headed off to meet up with them. 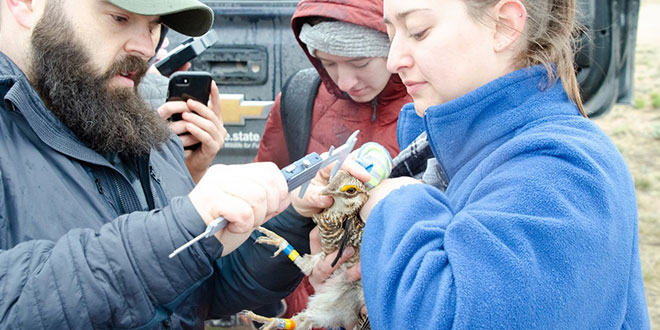 Above: Grisham, with the help of one of his students, measures the beak length of a lesser prairie chicken. Notice the colored leg bands that will help assist with bird identification in the future. Cody Johnston, New Mexico Department of Game and Fish

Thinking back just a month or so before, I had been walking through the sand country over dunes and dodging the yucca plants that stab you in the shins if you didn’t pay attention as Kauffman and Teague, who was also on this project, checked Kauffman’s quail traps. Not each trap we came to held birds, so she would rebait as needed and we would move on to the next. When we would come up to a trap that held birds, you could see the excitement in Kauffman’s face as she sped up to the trap before the birds found a way out. The excitement was understood, since having birds obviously meant more opportunities and data points for her project, but it was also a neat experience to see these little birds up close. With the provided telemetry backpacks from the New Mexico Department of Game and Fish, she would take a bird out from the trap, measure its wing lengths, beak size and other measurements for later use, and fit the backpack on the bird.

Now, for those who do not know, these backpacks are small, don’t hinder the birds from flying and can be a great tool to see where these quail travel and what habitat they use. A good example would be after prescribed burns are completed by the BLM, when it could enable Kauffman to see where the birds are, and, as she had previously told me, “if maybe those burns are providing a benefit to the quail, compared to unburned areas.”

After snapping a few photos for the article and all of us admiring the bird one last time, she would set the quail on the ground and in a flash, it would be airborne, headed for distant cover. For Kauffman, she could add that to her data journal as a successful trap.

It had begun raining before we arrived at the second prairie chicken survey site and it was getting colder, so it was good that the wildlife group and Department biologist had already gotten almost everything ready for Grisham before we arrived. Once everything was arranged, Grisham was ready to show the students how to handle and take measurements of the bird. Like the quail from Kauffman’s study, the chicken’s weight, feather length and beak size were measured, and multiple leg bands were placed on the bird to help researchers in the future if it was caught again. After some close-up pictures and a little education lesson from the professor, the bird was released to continue its dance for a mate. With that, another bird had been tagged and another set of data was accumulated to help guide biologists in the future.

These projects are just a highlight of some of the types of habitat projects and wildlife surveys in which biologists and researchers from numerous agencies and universities work together in a collaborative agreement, with the hope that sharing research and knowledge will provide for the continued success of all wildlife that make up a particular landscape. It’s not always as easy as one project for all species, but these wildlife professionals work hard every day to make the best decisions to benefit an entire habitat and the species that live there. For the lesser prairie chicken and scaled quail, the work at the Sand Ranch will go on. As more information is collected, it can benefit the management decisions as well, thereby hopefully bringing continued positive change for all species on the ranch, either directly or indirectly.