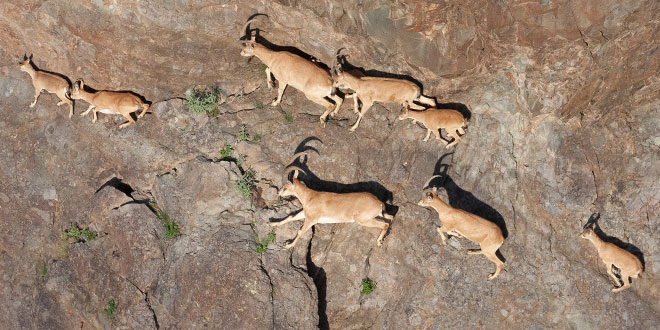 A rare glimpse: Persian ibex in the Floridas

The Department conducts an annual aerial helicopter survey for Persian ibex in the Florida Mountains outside of Deming. I was initially prompted to take photos of ibex during our survey because of their ability to outmaneuver the helicopter while literally running across a sheer cliff.

Ideally, when we survey big game species such as ibex, we get age and sex classifications. We count the number of males, females and young that we see. This gives us an indication of how productive the population is (i.e. how many young are surviving), how many males are in the population and ultimately informs our recommendations for license numbers. However, we weren’t collecting one particular component of this data for ibex on aerial surveys. Counting these young animals is key to understand how many young are surviving and ultimately dictates our management recommendations.

Up until that point, we were simply obtaining a total count and classifying the mature billies, or adult males, we observed, giving us no indication of how many juveniles ere surviving (a key component of what our management recommendation might be). I discussed this with colleagues who had conducted the surveys previously and they remarked that ibex were just too quick and this made it a challenge to get an accurate count of juveniles if we tried.

I figured I could solve this by taking some high-resolution photos of the groups, going back to the photos later and classifying out the young. I saw absolutely no issue with this direction forward, despite the warnings from my colleagues on the speed and maneuverability of ibex, so I brought my camera along.

I was immediately proven wrong.

Not only was it impractical to count the animals and then take photos, their speed and agility prevented me from actually getting any good photos of the entire group. Surveying ibex goes like this: Picture someone throwing a five-gallon bucket full of ping pong balls of a cliff and then trying to count them as they scatter in all directions and bounce off every surface you see. 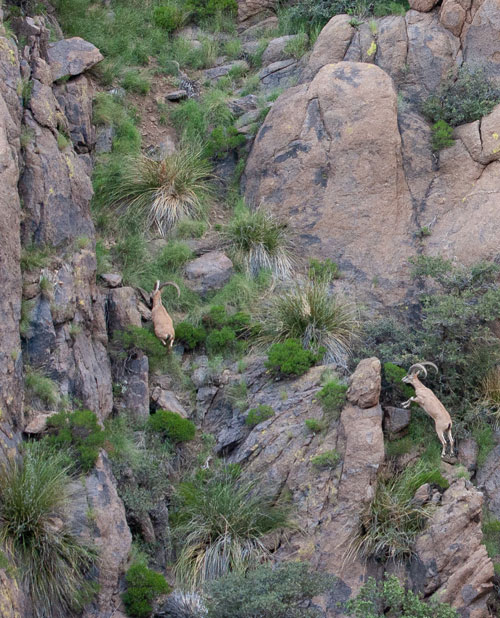 People almost never see ibex in this way. On any clear morning you would likely be able to glass up ibex from the base of a mountain with good binoculars or a spotting scope. But seeing them move across this rocky terrain close up is not possible without a helicopter. Ibex are a lot more challenging to survey than most other big-game species across the state. They are maneuverable, quick and live amongst cliffs. It’s even challenging to get the weather to cooperate enough for a helicopter flight. Wind often grounds our flights or a blanket of clouds may result in zero visibility.

I completely failed at my attempt to collect the data I was intending to gather and we went back to the normal way of doing things. Thankfully, annual ground surveys still allow us to obtain the needed juvenile classifications for management recommendations.This series of photos is the result of my endeavor.

You can see more of Nicole’s photos from this ibex survey in the Spring 2020 issue of New Mexico Wildlife. 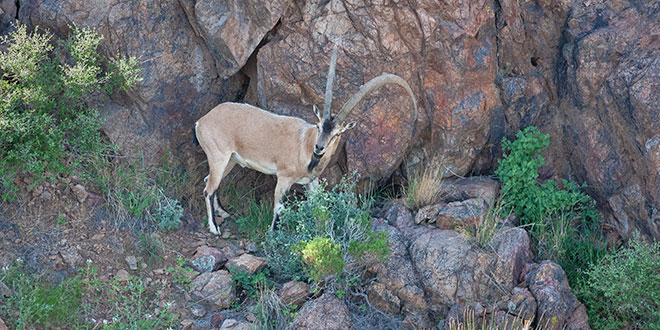 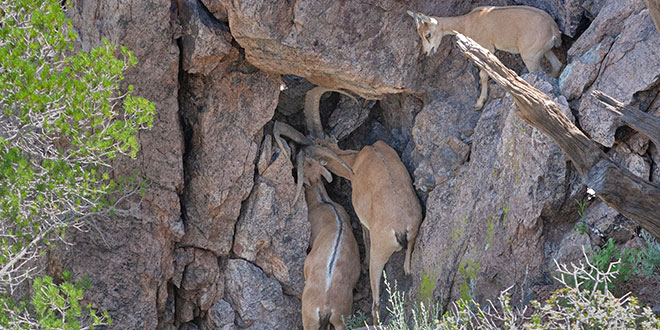 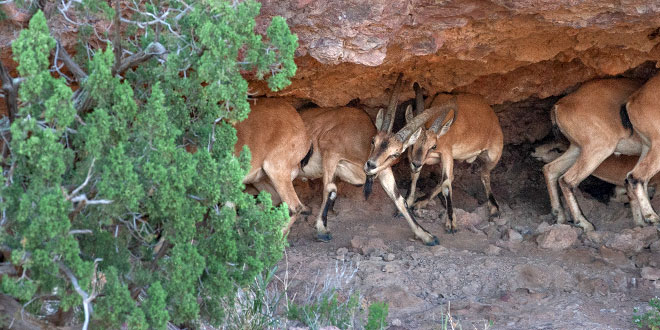 Next Prev
Gallery above. Image 1: A mature billy watching the helicopter hover during the Department’s annual aerial survey. Image 2: Ibex hide in small crevice in Florida Mountains. Image 3: Group of ibex duck into a small cave located high in a cliff on the Florida Mountains.
Share

Nicole Tatman is the Big Game Program Manager for the New Mexico Department of Game and Fish.