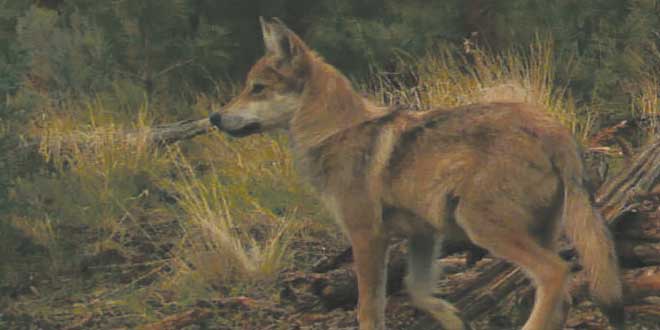 “It is only appropriate for the New Mexico Department of Game and Fish to have a seat at the table for this issue,” said Joanna Prukop, former chair of the New Mexico State Game Commission. “This allows us to have both influence and input into Mexican wolf recovery. The Commission fully supports this program and wants it to be as meaningful and well-managed as possible.”

Earlier this year, the Mexican Wolf Interagency Field Team (IFT), a task force comprising federal, state, tribal and international partners, found that the wild population of wolves continues to grow at a healthy pace. The recent Mexican wolf count shows the population of Mexican wolves has increased by 24 percent since last year, raising the total number of wolves in the wild to a minimum of 163 animals.

“The count shows we have more wolves, more breeding pairs and more pups born in the wild than ever before,” said Amy Lueders, regional director for the U.S. Fish and Wildlife Service in Albuquerque. “This is the second year we have seen a significant increase in the wild population of Mexican wolves, a success that is directly tied to the science-based, on-the-ground management efforts of the Interagency Field Team.”

In November 2019, the Commission and the New Mexico Department of Game and Fish signed a formal Memorandum of Understanding (MOU) with the U.S. Fish and Wildlife Service. The MOU establishes a framework for collaboration that enables the signatory agencies to implement a long-term, scientifically based program to reintroduce and manage Mexican wolves in Arizona and New Mexico to contribute toward the recovery of this endangered subspecies, in accordance with the Mexican Wolf Recovery Plan, First Revision.

Above: A Mangas pack Mexican wolf pup captured on camera in 2018. Photos courtesy of Interagency Field Team. Below: Captive-born pups are cross-fostered into wild dens each spring in New Mexico and Arizona. 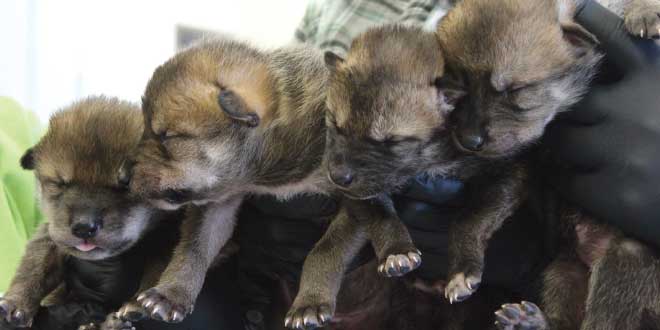 The decision by the commission to rejoin the Mexican Wolf Recovery Program comes at a critical time. With the recently approved Recovery Plan in place, members of the cooperative effort are working to meet criteria needed to remove Endangered Species Act protections for the Mexican wolf.
“We all share the same goal with this program, which is to achieve recovery and turn management of Mexican wolves over to the states,” said Lueders last fall. “This is a program built on strong partnerships and trust. We are excited to have New Mexico Department of Game and Fish as a cooperating partner and look forward to the expertise and support they bring to the table.”

At the end of 2018, surveys counted a minimum of 131 Mexican wolves in the wild in Arizona and New Mexico. The survey results confirmed there are a minimum of 32 packs of wolves (two or more animals), 18 of which had pups. Mexico began reintroducing wolves in 2011, and approximately 30 Mexican wolves now roam the wild south of the border. In addition, over 300 additional wolves are being held in various captive-breeding facilities located throughout the United States and Mexico.

The Service is currently tracking progress toward its first Mexican wolf recovery evaluation, as recommended in the Recovery Plan: the Five-Year Status Review. This review will be based on release and translocation data from 2015-2022 and on the annual population count for 2022.

The Mexican wolf, commonly referred to as the lobo, is the smallest and the rarest subspecies of gray wolf. The Mexican wolf once roamed throughout portions of Arizona, New Mexico, Texas, and Mexico. As human settlement intensified across the southwest in the early 1900s, wolves increasingly came into conflict with livestock operations. Extermination campaigns were waged against the wolf and by the 1970s, the Mexican wolf had been all but eliminated from the United States and Mexico.

The Service provides regular updates, recent location information and management documents for Mexican wolves on its website at https://www.fws.gov/southwest/es/mexicanwolf.