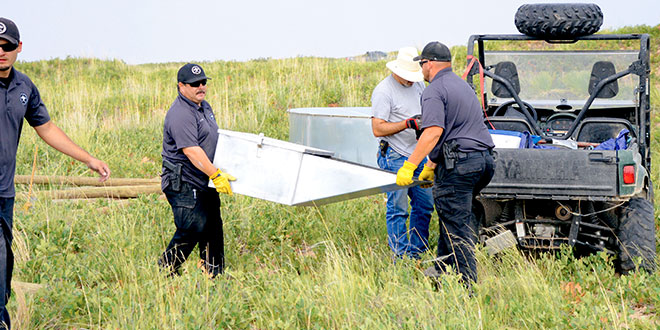 Wildlife in the southeast New Mexico desert get a new drinker

If you are from southeastern New Mexico or have spent any time here you know it is a dry and at times hot climate. It can be really hot, windy and dry in the summer months with not much rain in sight.

With the little bit of rain we do get, it comes down fast and hard and doesn’t last for too long on the ground once the sun comes out again. This can make it tough for wildlife in the area to find drinking water. With that thought in mind, wildlife biologists have for decades been installing wildlife drinkers in remote areas where water availability is sporadic. The idea being that wildlife habitat projects, such as wildlife drinkers, can enhance, help grow and maintain healthy populations of different wildlife for everyone to enjoy.

Crossroads #3 Prairie Chicken Area near the town of Crossroads is one of these hot, dusty, dry grassland areas of the southeast. It is home to many species of wildlife including deer, quail and the protected lesser prairie chicken. This area lacks any real water sources for wildlife species; after surveys it was decided by the department’s prairie chicken biologist and the southeast area habitat biologist that a wildlife drinker could really benefit the wildlife in this region. A plan was set in motion to install a wildlife drinker.

Above: Game and Fish biologists and officers fill up side by sides to the max with fencing materials and tools to install the new Crossroads wildlife drinker and a fence to keep out livestock. Department photo by Cody Johnston.

For those who don’t know what a wildlife drinker is, it is a system generally set up to catch rainwater, and hold it in a tank so it doesn’t evaporate. The tank is connected to a small trough that has a float; much like a swamp cooler on your house, and when the water level in the trough drops, more water is released from the holding tank. This assures that water is always available in the trough but not so much that it is evaporating. The large tank has an opening to catch rainwater, which works really well when we have those big monsoons that roll into New Mexico. With this system it helps provide water to wildlife in those tough times when there isn’t much precipitation.

Biologists, conservation officers and I loaded up all the tools and equipment we would need for the project and headed to the Prairie Chicken Area.
Luckily, a few clouds helped to keep down the heat. After numerous trips from the trucks to the site with two side-by-sides and an all-terrain vehicle (ATV) loaded down with gear, we were finally able to get started.

We first worked on putting up a perimeter barb wire fence that would prevent any loose cattle from neighboring properties from getting to the drinker. After a lot of digging, many bags of concrete and a few nicks and cuts from stretched out barbwire, the fence was up. We were then able to get to installing the drinker.

We began by digging out a small trench where the water line would be buried. We then had to dig out the hole where the trough would be set. The clouds had disappeared by this point and the temperature was reaching the upper 90s. Between the heat and having to dig through hard clay, the day was shaping up to be one of those hot, dry New Mexico days. Luckily we had brought plenty of water, and soon the wildlife would have a new water source as well.

After a few more hours of work finishing the installation of plumbing and a gate, the project was complete. Almost on cue, a monsoon arrived. It began pouring rain. What a great way to end the day and to start off that new drinker.