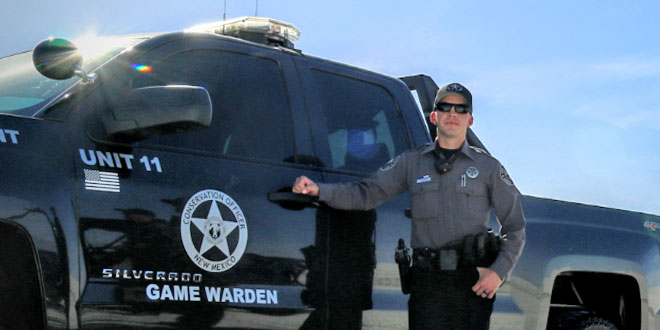 An Operation Game Thief (OGT) tip received in 2017 regarding possible wildlife poaching near Calico Peak in southeastern New Mexico has led to the felony conviction of a 23-year-old man from Hagerman.

Tyler Gilmore pled guilty to four counts of unlawful taking of big game and was sentenced last August to six years in prison, to be served concurrent with drug charges and five years of probation. Revocation of hunting and fishing licenses is pending and will be applicable in New Mexico and 47 other states.

Conservation Officer Corey Smith, who responded to the OGT tip on December 26, 2017, discovered a mule deer buck that had been shot and killed. The head was removed and the meat left to waste. Smith also found a dead bull elk with the antlers removed. There were no open deer or elk hunts in the area at the time.

Over the next few days the tally of dead elk and deer continued to rise. Three elk were found on property owned by the City of Alamogordo and a second mule deer buck was found in Upper Dry Canyon near Cloudcroft.

Smith followed up on several clues; however, everything turned to a dead end. On March 4, 2018, he came even closer to solving the case when a concerned sportsman provided Smith with a tip that led to another poached, headless elk.

This tip and an investigation by the Otero County Sheriff’s Office led Smith to Gilmore. Otero County deputies were investigating Gilmore on numerous criminal violations and discovered evidence that linked him to the headless bull elk from March.

Towards the end of his interview with Gilmore, Smith took note of the tread on the man’s shoes. The officer determined that the tread matched the tread impression left at the scene of the poached bull elk.

Gilmore began to falter in his story and confessed to being involved with the killing of the bull elk.

Over the next few months, conservation officers executed 10 search warrants, yielding cell phone data, DNA and other incriminating evidence. Smith conducted a second interview with Gilmore revealing that the DNA collected from his truck linked him to other unsolved poaching cases. Gilmore confessed to four of the poaching cases, stating that he was shooting the deer and elk, taking each head to sell and using the money to buy drugs.

This significant evidence and Gilmore’s confession allowed Smith to press charges in this case. “It was satisfying to solve this case,” said Smith. “This is an example of two agencies working together to catch and convict a serial poacher.”

Anyone with information about any wildlife crimes is urged to call the Department’s toll-free Operation Game Thief hotline, (800) 432-4263. Callers can remain anonymous and may be eligible for rewards if charges are filed. Reports also can be submitted anonymously online at www.wildlife.state.nm.us/ogt.