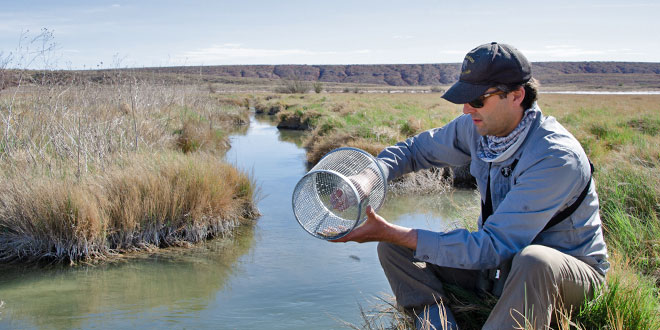 One small fish, one big undertaking

For New Mexicans, the words “native New Mexico fish” may first bring to mind the quintessential image of a Rio Grande cutthroat trout, with its red slash below the jaw, glimmering in a crystal-clear high-mountain stream. Or maybe it’s the golden hue of the Gila trout found in southwestern New Mexico.

Bryan Bakevich, Rio Grande Basin native fish supervisor for the Department, counts fish caught in minnow traps at a BLM property near Roswell. Department photo by Cody Johnston.
Maybe for some it isn’t a trout at all but something less known such as a razorback sucker with its large hump swimming around the San Juan River. Truth be told there are plenty of native fish in New Mexico that most people outside of the fisheries biology world may not know about, but play an important role in our state nonetheless.

One such fish, the Pecos pupfish, is one of these native species that I had the opportunity to explore and learn about with a team of fish biologists from New Mexico Department of Game and Fish, the Bureau of Land Management (BLM) and U.S. Fish and Wildlife Service. This aptly named fish measures only a few inches long and was historically found in stretches of the Pecos River in New Mexico and Texas. Today, it is mainly found in springs, marshlands and sinkholes centered around the Roswell region. It is listed as a state threatened species and was proposed for federal listing as endangered by the U.S. Fish and Wildlife Service because of reductions to its historic range, but due to Conservation Agreements and partnerships among the Department and federal agencies it remains off any federal lists.

The morning began as I packed up the work truck with my camera, my lunch and the waders I was sure to need at some point in the day. I pulled out of the Roswell Department office and headed out to meet the biologists at the Bureau of Land Management (BLM) overflow wetland located near Bottomless Lake State Park. There I would photograph the biologists’ population survey techniques and learn about this localized fish. From e-mails back and forth, I knew that the evening before biologists had set minnow traps, which resemble two wire mesh buckets attached together with holes in the ends that allow the fish to swim in but not easily swim out. There were approximately 80 traps placed out in the shallow overflow channels that were left to lure in any Pecos pupfish.

I pulled into the parking lot and parked my truck near a walk-in gate at the BLM overflow where some of the biologists were already waiting. After the customary greetings and introductions of new people, a little chat about the day and gratefulness to who brought doughnuts, we slid into our waders and headed out. As we approached the channels and stepped off the bank onto the slippery bottom we could see the schools of small fish swimming away as the mud kicked up from our boots dispersed out into the water. As traps were pulled up it was easy to see some held a few fish and some were empty. Some held numerous fish that glistened in the sun. With each trap pulled that held fish a biologist would wet their hands and begin to carefully remove and count off the numbers of each species of fish found. This data would later be used to determine the population sizes of the fish inhabiting these waters and what, if any, steps were needed to ensure the continued presence of the Pecos pupfish. 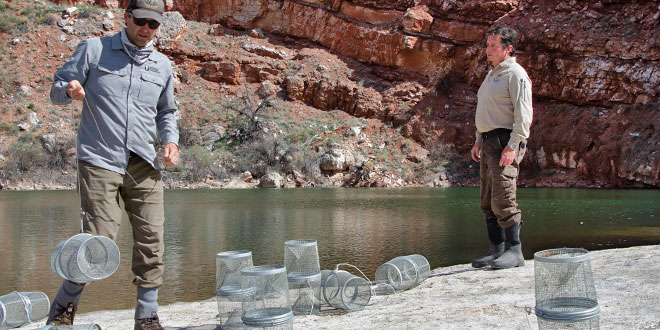 The pupfish shares its space and competes with other species, just like other fish, such as trout, do in the lakes and streams they inhabit. Depending on where biologists are setting traps in this warm water system, the pupfish may or may not be the most abundant species found. As evidenced from the traps that were pulled that morning some held Pecos pupfish and some held a mix of other fish including plains killifish, rainwater killifish and red shiner. There was also one green sunfish who found itself in the mix. All of this information was recorded and can be helpful to fisheries biologists to learn what species share the water with the pupfish and how that can help or hinder the species.

As fisheries biologists, their goal is not only to track populations of a species in a particular water, but determine how they can protect, or even enhance, the likelihood of survival for that species through habitat restoration, water quality monitoring and non-native fish exclusion. Later that morning, after all the traps had been checked and the fish had been counted and returned to the water, the biologists took me to a fish barrier that had been constructed to help keep non-native fish out of the upper BLM overflow marshland.

The barrier, built in collaboration with the Department and BLM, looks like a small dam that allows water to flow unrestricted, but does not allow small-bodied fish that may come from the Pecos River to swim into the upper channels. This barrier prevents hybridization with non-native species such as the sheepshead minnow. Hybridization occurs when the pupfish reproduce with this eastern species causing genetic losses that reduce the pure populations of Pecos pupfish through competition with hybrid offspring. Hybridization with the non-native sheepshead minnow is the biggest threat to the survival of the species and this non-native fish has been working its way up the Pecos River from baitfish releases in places like Brantley Lake near Carlsbad.

After we took a break for lunch, and some time out of the sun at a house on the local wildlife refuge where the biologists were staying, we headed back to Bottomless Lakes State Park so the crew could set more minnow traps in a few of the sinkhole lakes. At each of the chosen waters, sinkholes traps were tossed out into the shallow waters along the edge of the lake and tied to whatever nearby object would hold the trap overnight in hopes that they would be filled with fish the next morning. This work would continue throughout the afternoon until the biologists had set enough traps to be able to record an accurate count of the populations.

At this point it was late afternoon and I had all the pictures and interviews I needed, so I peeled off the waders that I had been wearing most of the day and headed back to Roswell. The biologists, however, who practically live in their waders, would stay behind to finish setting the rest of the traps and the next morning would continue the process of counting and recording each species that swam into the traps the night before.

Long days, whether on the bank of a reservoir, floating down a river or walking up a creek in waders to study fish populations and fish health are the norm and a passion for these fisheries biologists. It’s hard work but projects like the Pecos pupfish study are just one of many across the state that New Mexico’s biologists contribute their knowledge and effort to in an attempt to study and help protect native fish, whether well-known or not, in hopes that they will be around for the sake of the species, the services they provide to the ecosystem and for future generations of New Mexicans to enjoy.