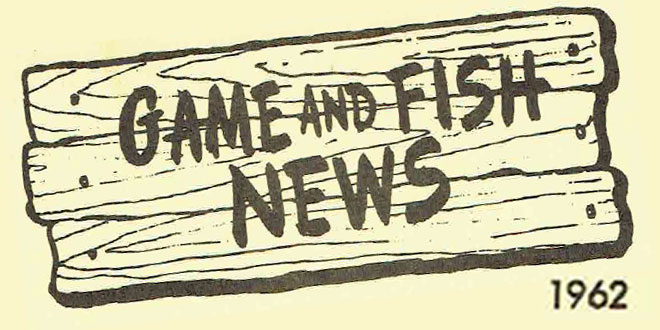 News blasts from the past

You just never know what might walk into an area Game and Fish office. A piece of scat for identification or part of a road-squished snake in a plastic baggie, for example.

Recently, a stack of old Department press releases from 1962 found its way to my desk. It is very interesting to read through them and see what the big issues were decades ago, and to see just how much has changed since then.

Let’s take a closer look at these announcements. Travel back with me to ’62 when Kennedy is president and will ask Congress to put a man on the moon, the Beach Boys just started a new musical sound sweeping the nation and the Sandia TramWay in Albuquerque won’t open for several more years.

A milestone for anyone who has enjoyed the taste of New Mexico walleye was reached that year: The first evidence of natural walleye spawning in Elephant Butte was observed when 10- to 12-inchers were found in gillnet surveys downstream in Caballo Lake, where walleye had not been stocked. Our fisheries biologists continue these surveys today and conduct artificial walleye spawnings where eggs are collected, stirred with a crane or turkey feather with sperm from the males, raised in our hatcheries and then released into appropriate New Mexico waters.

Our state offers a variety of exotic big game hunting that one would have to travel far abroad to find in their native ranges. In November 1962, our then Game Commission was investigating the possibility of adding another species. Two male and six female greater kudu, an African antelope species, would arrive at the Rio Grande Zoo in Albuquerque “next spring.” The hope was that their offspring would be introduced to the wild on an experimental basis. Interestingly enough, an old skull believed to be from a kudu was found not too long ago at one of our fenced properties we use for bighorn sheep breeding. Kudu offspring from this endeavor made the first step to being introduced to a fenced area, but never established further.

Prior to 1976, hunters under the age of 18 were not required to pass a hunter safety course. The need for that mandate was clear back in 1962. “Forty-seven firearm casualties connected with hunting are known to the Game Department as of mid-December,” a release reads, with most seeming to be tied to rabbit hunting. “The Department continues to urge sportsmen organizations to provide hunter safety instruction,” it continues.

At that time, such instruction was available from the National Rifle Association (NRA). Today, you can attend a free hunter education class in person or online, with the NRA course still being a free option.

The director “points out that the greatest danger is not in big game hunting, but in the 21 rabbit-hunting related incidents.” Injury and death from hunting accidents in 1962 exceeded the previous year’s numbers and totaled 35. One possible aid to the hunting accident problem back then was to consider making rabbits a game animal so they would fall under Department purview.

Later that year, a press release announced the addition of the golden eagle to protections under the “Bald Eagle Act.” The Bald Eagle Protection Act gave that species legal protection in 1940. Juvenile bald eagles lack the namesake white head and can resemble golden eagles, so protecting both because of their similarities makes sense. But eagles in 1962 had a lot more to worry about than mistaken identity.

Another page in the stack discusses a study’s findings of detrimental chemical residue in eagle tissue in various parts of the country. That chemical, found in all 25 eagles examined, was DDT, and wasn’t banned in the U.S. until a decade later by the Environmental Protection Agency (EPA). DDT is an insecticide that bio-accumulates (amounts and effects magnified up the food chain) and causes reproductive failure in eagles and many raptors by making egg walls too thin for parents to incubate.

Incidentally, Rachel Carson’s seminal work, “Silent Spring,” was also published in 1962 and spoke against the indiscriminate use of pesticides and its harm to wildlife. Her book is considered by many to be a wake-up call for the nation that set much-needed change in motion.

Some good, some cringe-worthy, but it’s all history we’ve learned from and used to reach where we are today. I like these kind of office walk-ins… ones I don’t have to don surgical gloves to examine.

Click the links below to read the orginal announcement:

Trout eggs arrive, 12/6/62: The Department no longer receives eggs from Massachusetts; however, we still receive rainbow trout eggs from a farm in Washington State.

Hunter casualties up, 12/6/62: Hunters can now attend a free hunter education classes in person or online.

State to get new animal, 11/8/62: Kudu never established in New Mexico; however, both oryx and ibex have thrived in our state and can be hunted.

Javelina hunt authorized, 11/8/62: Only four counties were hunted for javelina in 1962. Today javelina can be found in many counties throughout the southern and central portions of the state.