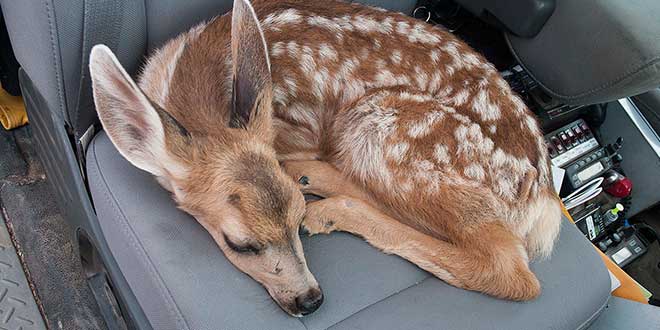 The sirens are sounding because a mother’s child has gone missing.

The wildlife Amber Alert has been activated and word is spreading throughout social media as mom searches in vain for her missing offspring.

“Every year, around this time, well-intentioned individuals try to save wildlife newborns that appear to have been abandoned by their mothers,” said James Pitman, elk program manager with the New Mexico Department of Game and Fish.

The problem, of course, is that the animal the person seemingly rescued wasn’t abandoned at all and such actions can have dire consequences for wildlife.

Above: Well-intentioned people seeking to help occasionally remove baby animals from the wild. Newborn wildlife is rarely abandoned and should be left alone. The more likely scenario is that the mother is foraging for food or has been frightened away by the presence of a human. NMDGF photo by Dan Williams.

“Removing animals from the wild can be a death sentence,” Pitman said. “At the very least that animal could spend the rest of its life in captivity.”

An animal often ends up in captivity as a result of imprinting. That is when an animal is held by a person for a period of time and views a human as its mother. They may also lose their natural fear of humans and will not receive a proper diet.

Bottom line: Wildlife is rarely abandoned. Most often the mother is out foraging or it is simply a protective slight-of-hand trick by animals as a response to a potential threat.

However, the desire to lend a helping hand can be overwhelming.

“The intentions are good, but not the results,” Pitman said. “When it comes to a species like deer, the mother will leave the newborn behind while she forages. That newborn knows to stay where it is until mom returns.”

Young quail will follow their mothers soon after hatching, but if the mother is frightened, she will fly away or try to distract the perceived predator by acting injured. When the threat is gone, the mother returns.

“It’s also important to remember that quail are a ground-based bird and they have not fallen from nests,” Pitman said. “Simply put, removing young animals diminishes their chance for survival.”

Newborn rabbits separated from the mother have little chance of survival. Recently hatched birds that have fallen from their nest also can be doomed by a common myth.

“Many people still believe that their scent on the bird will result in the mother neglecting the chick,” said Peggy Darr, nongame avian biologist at Game and Fish. “The vast majority of birds have a very limited sense of smell, so human scent isn’t going to interfere with the chick being cared for.”

Darr said the mother will usually continue to care for a chick on the ground as long as humans give mother and chick their space. However, if there is imminent danger to the bird, a person can pick it up and place it back in the nest.

Other methods to help include watching your pets and vehicle speed.

Domestic dogs and cats can negatively impact wildlife, especially in the spring when young are born and hatched. Outdoor cats have a particularly large impact on birds, small mammals, and reptiles. In addition, during spring, wildlife are quite active at times when the roads are busy with traffic: dawn and dusk.

“Keeping a dog on a leash and cats indoors is certainly a benefit to wildlife, especially in the spring,” Pitman said. “Young wildlife have not yet developed all their defenses or learned to distinguish a potential threat.”

As for human intervention, it’s simply best to let nature run its course.

“You wouldn’t want someone picking up your child in the front yard and dropping them off at the police station when you simply stepped inside the house for a moment,” Pitman said. “There’s no reason to remove wildlife, either.”

If a young animal is believed to be injured or a safety threat, call Game and Fish.