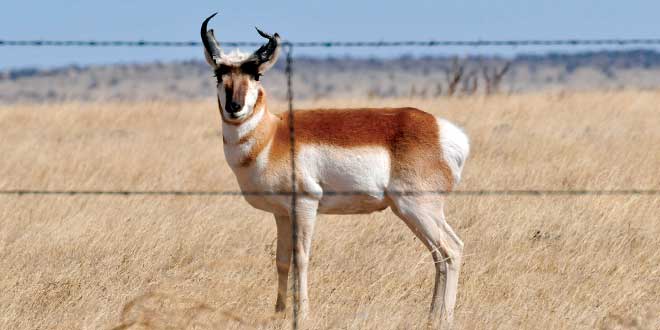 The need for modern conservation efforts

In the last 100 years, development has boomed, cities have grown and the connections people have with the outdoors has been replaced by the internet, shopping malls, movie theaters and home entertainment centers.

The roadways we use, our homes, fences and our workplaces are parts of our everyday lives that also have huge impacts on wildlife — impacts that we often overlook.

Above: Fencing can impede movement of some wildlife, including pronghorns. Although capable of jumping, pronghorns ring to go under fences. Pronghorn-friendly fences include an 18-inch gap from the ground to the first strand. Fencing without such modifications impedes pronghorn movement. NMDGF photo.

This disconnect sometimes leads to questions when someone sees or reads about a wildlife agency conducting conservation work.

“Why do you interfere with wildlife? Why not just leave the animals alone?”

“Good question,” said Nicole Quintana, big-game manager for the New Mexico Department of Game and Fish. “But, let me answer the question with a question: How have humans not already interfered with wildlife?”

Habitat is composed of food, water, shelter and space. Developed areas – whether they be a 40-acre slice of heaven, urban housing and apartments, or a work environment – were once habitat for wildlife.

“We drive cars, which can be a threat to wildlife,” Quintana said. “In the United States more than one million vertebrate animals die each day in vehicle collisions. That’s a staggering number. That’s about 12 vertebrates killed every second of the day.

“We drive these cars on roads that have fencing on both sides. This fencing and human activity along the roadways fragment wildlife populations.”

When out driving or hiking, it’s easy to look at the vast open spaces with little thought that these once uninterrupted areas are not as open as might be perceived. Roads and fencing have sliced these areas into smaller wildlife parcels.

Fragmentation is a growing problem that can impact genetic diversity, sever historic migration routes and separate the animals from one of those critical elements that constitutes habitat.

It also creates a potential issue with disease.

“When habitat is cut into smaller pieces, animals are obviously placed into tighter quarters,” Quintana said. “When one animal becomes sick, the potential to spread the disease increases. Think about cold and flu season. One child gets sick at school and walks into a classroom and coughs. Because of how close together everyone is, it’s easier for that child to pass the disease to others.

“When this happens, fragmentation can make it impossible for that species to naturally recover and repopulate an area.”

That leaves the biggest issue of all: loss of habitat.

Some may contend that hunting leads to a species’ demise, but modern hunting practices – a far cry from the days of market hunting – never have led to the loss of a species. Rather, it pays for modern management efforts and supports not only those animals that are hunted, but also those that are not.

Loss of habitat is the leading cause of population declines and wildlife extinction.

“It’s a real problem for wildlife,” Quintana said. “How do humans and wildlife coexist despite all the modifications made to the landscape? Modern techniques for monitoring wildlife, such as tracking collars, allow biologists to understand behavior, travel patterns and reasons for mortality, which is helping.”

Passive management, or the “leave wildlife alone” approach suggests wildlife could overcome barriers with no assistance.

“Animals can no longer travel around the landscape the way they once did,” Quintana said. “Sometimes the only way to restore populations to their historic range is to move animals from one area to another.”

The obstacles wildlife face are daunting, but biologists across the nation are working tirelessly to find solutions.

In New Mexico, Abo Canyon bighorn sheep had two-railed track running through the habitat. The Department of Game and Fish worked with Burlington-Northern Santa Fe Railroad to install 8-foot fencing directing bighorns under the tracks to reduce the odds of train-wildlife collisions.

Game and Fish habitat biologist George Farmer said pronghorns in the southeastern portion of the state are benefiting from a collaboration between Game and Fish, the Bureau of Land Management and ranchers. Because pronghorn prefer going under fences rather than over, raising the bottom strand of a fence to at least 18 inches off the ground improves connectivity.