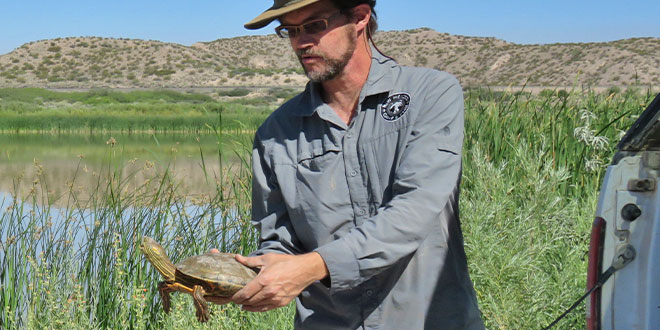 ?How did you start with the Department of Game and Fish?
I started out as the Geographic Information Systems (GIS) coordinator/Biota Information System of New Mexico (BISON-M – https://www.bison-m.org/), having had experience with GIS and contracting with the Department to remotely survey prairie dogs. A few years later, I worked on recovery planning for the state with a focus on amphibians, reptiles, birds and mammals before becoming the state herpetologist over four years ago. ?Why reptiles and amphibians?
Amphibians and reptiles came onto my radar in my graduate school days. I had always been interested in wildlife and caught my fair share of gartersnakes as a kid in New Mexico, but my initial interest was in research and sharks, the latter courtesy of the movie, “Jaws.” Not having any sharks here in the state, I took a course in herpetology and the professor and I ended up working together for many years. I’ve always had a passion for helping poorly-represented species like snakes and toads, not to mention little mice and bats, so the position of herpetologist was attractive to me. ?What does a typical month as state herpetologist look like?
Much of my job entails working with the U.S. Fish and Wildlife Service to recover species currently listed for protection under the Endangered Species Act, or working to make protection unnecessary for species proposed to be listed. The majority of field work surveying for reptile and amphibian species is contracted out to species-specific experts, although I do like to help when possible. As you might imagine, there are a lot of meetings, study designing and contract management. I also field calls from the public, with one of favorites being offering advice to students interested in reptile and amphibians research. ?Do you think reptiles and amphibians are misunderstood?
Yes, though it is getting better. Many species aren’t as readily observed as birds or mammals, which can lead to misinformation and fear. Living in New Mexico means living with venomous reptiles, particularly rattlesnakes. Citizens should educate themselves about living with venomous animals and should maintain a healthy respect for all wildlife. Amphibians and reptiles are integral parts of an ecosystem. ?What are some commonly asked questions you receive from the public?
Along with questions about living with rattlesnakes, I receive a lot of questions toward identification of various species. I strongly encourage members of the public to purchase a quality field guide should they have interest in reptiles and amphibians. In a field guide, a very important part to pay attention to are species maps – maps where a species has been documented. Often, people run to the internet, looking for pictures similar to what they found and ignore that the animal online may be a species that has never been documented in their area or perhaps even the state.

I also receive a lot of questions about scientific and commercial collection permits, but those are actually handled by the Department’s special permits office in the Field Operations division.

Invariably, I’m often asked about the decline of horned lizards where they used to be seen more abundantly. They are still found across the state, even around larger cities, but not nearly like they used to be because of road mortality, outdoor cats and dogs killing them and the use of pesticides to remove ants, the primary prey for horned lizards.

And pink snakes. Every year, I receive multiple reports from callers exasperated that they saw a “great big, bright pink snake.” One of the most commonly seen snakes throughout the state is the non-venomous coachwhip, with one possible color morph being bright pink, particularly around Albuquerque and Santa Fe. Though beautiful, they are neither rare nor noteworthy.

?What would you like the public to know about your position?
What the public may not be aware of is how important the state of New Mexico has been to the study of reptiles and amphibians. My predecessor, a wonderful man by name of Charlie Painter, had the wisdom, along with the support of many, many folks to start this position. Charlie won national awards for conservation in the field of herpetology and did so through a massive network of researchers and enthusiasts. Like most other biologists in the Department, I’m a one-person shop and the great work that has been achieved was only possible though an amazing amount of collaboration. New Mexico has a rich tradition of herpetological research and the Department strives every day to keep that legacy alive and well.
Share