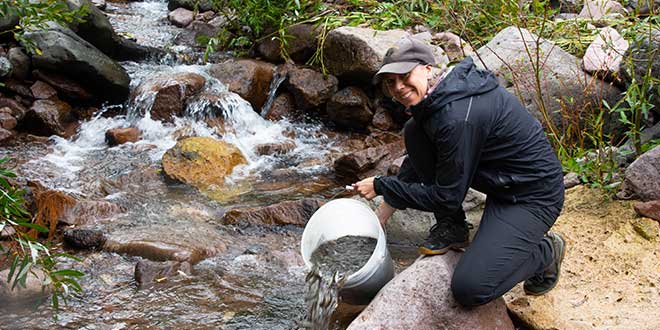 A trout stocking took place in Whitewater Creek in early August, but that sounds far too simple for the efforts culminating that day.

For starters, the trek into Whitewater Creek is not an easy one. The team hiked for over four hours, with the wind blowing around a steep canyon as they slowly descended. Huge, down trees frequently block the narrow, switchback trails, and the path itself is often washed away or overgrown with catclaw-bearing locust trees that seem to know to halt their growth at exactly human shin height.

Because Whitewater Creek is located in the Gila Wilderness, near the small town of Mogollon, no motors are allowed – no all-terrain vehicles (ATVs) to make the trip easier, no chainsaws to clear the path, no helicopters allowed to land.

Some of the biologists on this trip have made the arduous journey over two dozen times.

The next morning after camping – legs sore from the previous day’s adventure – another hour hike through occasional chest-high stinging nettle was necessary to reach the site for something occurring that no one living has likely witnessed here.

Much work has gone into this day, the day native Gila trout will be stocked in Whitewater Creek for “the first time in perhaps one hundred years,” said Jill Wick, native fish program manager with the New Mexico Department of Game and Fish. 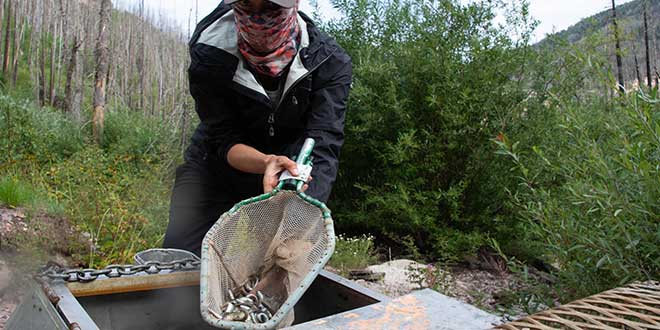 Wick explained that it all started with lightning strikes in May 2012 that ignited two fires that converged into the Whitewater-Baldy complex fire. The fire consumed up to 20,000 acres per day under very dry conditions. Runoff from surrounding, scorched landscape caused ash, dirt and debris to smother Gila trout streams, destroying miles and miles of habitat.

Since those fires, Department biologists have had an ongoing goal to re-establish native Gila trout. Non-native trout species (which not only occupy habitat where Gila trout could be and compete for resources but can also hybridize with Gila trout, causing a loss of genetics) were removed and environmental DNA (eDNA) monitoring (link: https://magazine.wildlife.state.nm.us/fisheries-biologists-tap-into-dna-detection-technology/) was conducted until biologists were confident all competitor trout were removed.

Whitewater Creek is located in the Gila Wilderness, near the small town of Mogollon. Department photo by Jeremy Lane. 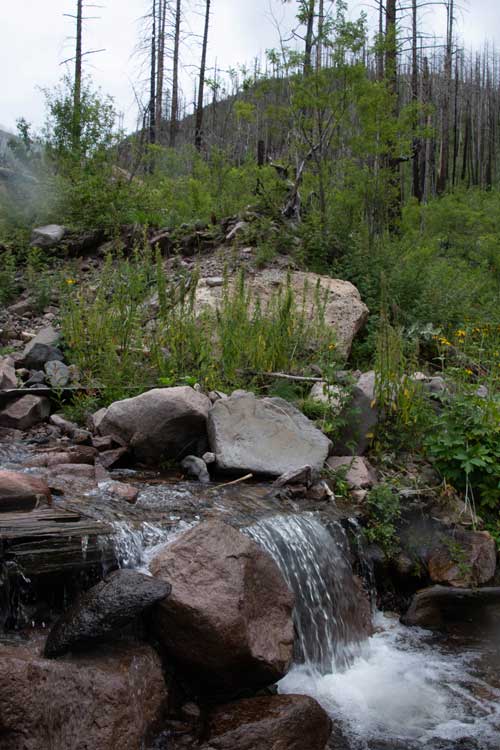 “Ash flow killed a lot of fish in this creek, which created an opportunity to remove non-native fish over the last three years,” Wick said. Following the habitat destruction, some Gila trout were saved by Department biologists and transferred to a nearby fish hatchery to preserve their genetics.

“It’s a really remote location, which definitely presents some challenges to the project,” said Wick.  “The drainage is over 23 miles, with very minimal access. Over the years, we’ve used pack mules, horses and helicopters long-lining gear to crews of 20 to 30 people working and camping in various parts of the canyon.”

On this day, a helicopter uses one of those long-lines to carry a large, square metal container to safely lower fish to the ground, where biologists netted the fish out and released them into the creek.

Afterward, high-fives and tears were shared in celebration, further demonstrating the tremendous commitment and dedication these biologists have for New Mexico wildlife.

“This wouldn’t have been possible without our partners, including the Gila National Forest, the U.S. Fish and Wildlife Service, local chapters of Trout Unlimited and the support of local communities,” Wick said.

“After working on this project for the past seven years, to be able to put Gila trout in this water today is an incredible honor and is so exciting for me,” she continued.

Paggen summed up the massive, multi-year effort by saying, “This stocking today is a huge stepping stone for the benefit of this species, providing the opportunity for the population to have a stronger foothold in working towards recovery. I know we’re all hoping that, throughout the next few years, we’ll see this age class grow into an excellent fishing opportunity.”

Though the little, yellow trout had no idea how momentous the occasion was, the rest in attendance certainly did.

Watch this video to learn more about the restoration effort.