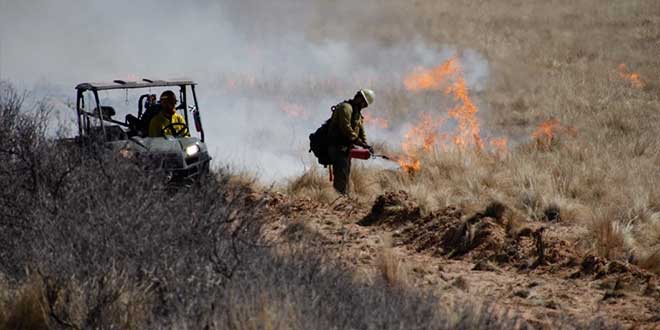 Fire as a management tool: Agencies and private landowners collaborate to provide benefit to prairie grasslands

A word that when usually heard can lend itself to panic and alarm, and rightfully so in the setting of a cityscape or catastrophic wildfire.

But for a moment, let’s stop to speculate: is fire always a bad thing? In regards to wildlife and habitat, fire has been a normal occurrence throughout history that has helped landscapes remain healthy by promoting new vigorous growth of vegetation and by removing dead, fallen debris.

For wildlife habitat biologists, fire is one of the major tools in their arsenal to bring about largescale and beneficial change to an environment in a swift and cost-effective manner.

One such prescribed burn for habitat management occurred in February at the Milnesand Prairie Chicken Wildlife Management Area on the eastern side of the state. This area is one of multiple properties the Department owns to aid in the conservation of lesser prairie chickens near Milnesand, New Mexico.

“The primary purpose of the Milnesand prescribed burn was to reintroduce periodic disturbance, in the form of prescribed fire, to the fire-adapted prairie near Milnesand to improve habitat for [the] lesser prairie chicken and other prairie wildlife,” said Ryan Darr, lands program manager for the New Mexico Department of Game and Fish.

Historically, fire on the landscape brought about positive changes, such as removing invasive plant life, enhancing nutrient cycling, removing excessive debris (fuel loads) and improving forage for wildlife. Before European settlement, fires were a regular occurrence brought on by events such as lightning storms.

Since fires occurred more regularly when a fire burned, it would burn at a lower intensity due to the decreased fuel loads on the ground. In turn, these cooler fires would help to create a mosaic pattern of vegetation types across the landscape and thereby provide benefits for multiple wildlife species.

These mosaic patterns are what habitat biologists are trying to create when using fire as a management tool, so that “the landscape retains a diversity of food and cover types for the benefit of the greatest diversity of wildlife species possible,” said Grant Beauprez, lesser prairie chicken biologist for the Department.

With the weather cooperating, the team’s ready wildland fire specialists from the U.S. Fish and Wildlife Service, Bureau of Land Management, U.S. Air Force Wildland Fire Management and the Department donned their fire protective gear and readied the fire trucks.

Conservation officers and volunteers from two local fire departments monitored roads to protect public safety and with everyone ready, the drip torches were lit and the fire commenced. Wildland fire specialists walked the area carrying large red cans labeled flammable liquid that were used to set fire to the grass and bushes as they walked. In a relatively short time the ground was ablaze, the dry wood and brush crackled as it burned and smoke filled the air. Fire specialists could just be seen through the haze of the heat and smoke, doing a job they knew well.

Containment lines had been cut days before to keep the fire contained to just the area meant to be burned, but firefighters on side-by-sides frequently checked the containment lines just to be sure. There were also constant checks of weather patterns and the back and forth on the radios, ensuring that firefighters stayed safe in the midst of the fire.

The fire crews continued until the evening to get all of the area burned, and crews from the Fish and Wildlife Service monitored into the night to make sure flare-ups didn’t occur. In the end, fire specialists would safely burn 1,084 acres of State Game Commission Lands (Milnesand Prairie Chicken Wildlife Management Area), 551 acres of State Trust Land leased by the Department and approximately 320 acres of private land, effectively providing for largescale habitat improvement through fire.

With sufficient rain over the next few months, the area quickly recovered with new grasses, forbs and woody cover such as shinnery oak, delivering a “reset” to the landscape and providing new growth that will benefit wildlife with new food sources and habitat. The excessive fuel loads that had built up in the prairie landscape also have decreased, thereby reducing the chances of extreme wildfire dangers.

Below: Prescribed fire took place at one of the Department’s Prairie Chicken Management Areas near Milnesand, N.M. Cody Johnston, New Mexico Department of Game and Fish. 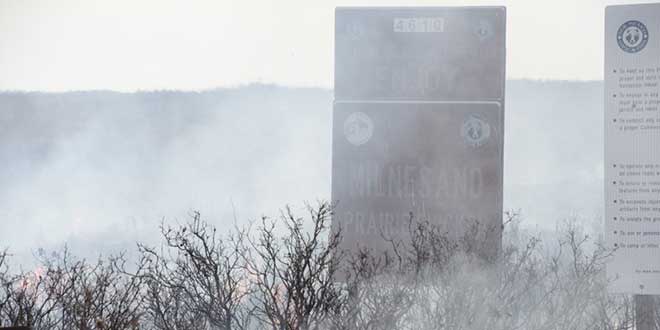 “Department staff have placed time-lapse cameras on-site to document the burn recovery and will be continuing long-term vegetation surveys being conducted on the site,” says George Farmer, Southeast Habitat Biologist for the Department, further ensuring the success of the burn.

With the success of this project, Darr says the Department is looking forward to future collaborations to bring prescribed fire to other Department Wildlife Management Areas and participating private ranches in southeast New Mexico and across the state with the goal to “maximize [the] benefit to habitat and wildlife.” 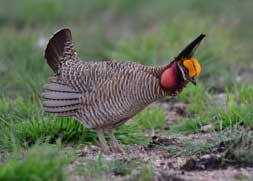