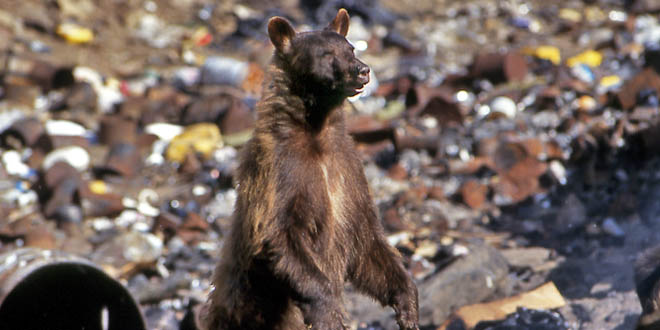 Feeding and the food chain

It really doesn’t matter if it’s Yogi the Bear, Wile E., Bugs, or Alvin the Chipmunk, feeding wildlife can have dire consequences.

The majority of wildlife conflicts involve a feeding issue, whether it be intentional or not.

“When the Department of Game and Fish needs to respond to a call regarding bears, lions, raccoons or any other animal, it isn’t generally hard to figure out why there’s a problem,” said Kerry Mower, special projects and disease specialist with Game and Fish.

The biggest culprit is food on the ground, such as block bird seed or pet food.

The intention might be to simply attract birds, but there are many animals that will take bird seed.

Above: Food on the ground is the biggest culprit in human-wildlife conflicts. Feed one animal and a person is potentially feeding many. Deer are the favorite food of cougars, and black bears become quickly habituated to people when provided an easy food source. NMDGF photo by Dan Williams.

“There’s an entire food chain out there and if you attract one, you are likely attracting many, and some of those may not be as welcome.”

While an individual may indeed attract the targeted animal such as a cottontail, squirrel, deer or elk, there are predators that will view this situation as an opportunity for an easy meal.

“People often like to believe they are helping wildlife by putting out food,” Mower said. “But the practice of feeding wildlife isn’t helping.”

The desire to see wildlife outside a house window can lead to an escalating issue.

“It might not happen at the start, but when people attract prey animals, predators can certainly follow,” Mower said.

Cougars and bears are at the top of the food chain and can pose a threat to humans. Depending on a given situation, a habituated predatory animal displaying no fear of people often must be euthanized.

“There is a public safety aspect that must be considered with predatory animals,” Mower said.

“Unfortunately, there are instances when an animal’s behavior dictates it be euthanized. It’s not a part of the job anyone relishes, but it must be done for public safety.

“And it’s important to remember many of these situations could have been avoided if not for food being placed out to attract wildlife.”

Some may consider this a calculated risk to see their favorite species providing photographic or video opportunities, but the dangers extend well beyond the possibility of a predator landing at the front door.

“Wildlife have specific nutritional needs and the majority of people don’t meet those needs with the attractants they use,” Mower said. “People may use hay for animals like deer and elk, but some types of hay provide little nutritional value.

“The passion people have for wildlife is admirable, but the desire to ‘help’ them can be misguided.”

Diet is just the tip of the iceberg. Few probably consider disease when placing out food, but it is a concern for biologists.
Food sources can bring wildlife into close quarters where they are forced to comingle and they no longer naturally disperse and forage. This means many animals are feeding from the same food source and one diseased animal might then transmit disease quickly to others.

“In a case like this, those putting out the food may have sentenced a number of animals to death,” Mower said.

Some wildlife diseases can be transmitted to humans, such as tuberculosis, brucellosis, or rabies.

There are many cases of one person’s passion being another person’s pest.

“And we tend to associate only predatory animals with danger,” Mower said. “This really isn’t the case. In the last few years several people were gored by elk. Many people just don’t understand that a bull elk’s behavior, especially during the rut, is quite unpredictable.”

Seemingly innocent acts can also create a public nuisance. Leaving pet food outside, for instance, can attract a host of unwanted animals such as skunks, foxes and raccoons, not to mention lions and bears.

An example is vehicle collisions, which can impact both humans and wildlife.

What You Can Do

People can help by doing a little research before landscaping.

“Plant native,” Mower said. “Many local nurseries and reputable websites can provide direction for a specific area.”
By planting native, people are providing wildlife with their natural diet, but the animals will continue to disperse and forage naturally.

Yogi and Boo-boo know how to survive on their own and if there’s a big desire to see wildlife, there’s over 20 million acres of public lands in New Mexico to spend a day exploring and viewing.

Just remember to keep food off the ground and don’t forget to secure that picnic basket.