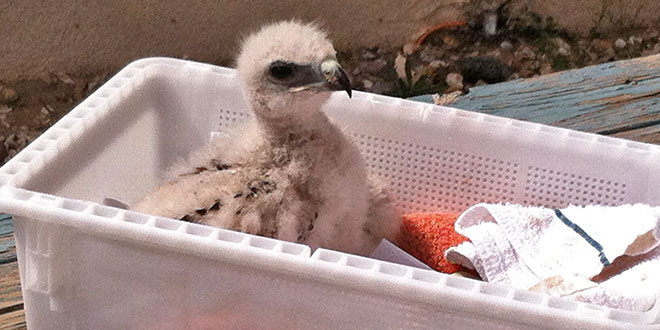 Creating a rapport with raptors

Tips for coexisting with urban birds of prey

Summer is here and with it comes an increased chance of encountering an urban raptor. Raptors are a category of bird that includes all eagles, falcons, hawks, kites, owls, harriers, osprey and usually vultures. While some of these winged predators are present year round in New Mexico, it is only for a brief period each year when conflicts tend to arise.  The U.S. Fish and Wildlife Service hopes that with education and better understanding, everyone can learn to coexist with these ecologically important birds of prey.

The two most common raptor-related issues during this time of year are aggressive raptors protecting a nest and people “rescuing” fledging raptors found on the ground, according to Kristin Madden, the Service’s southwest deputy chief of migratory birds. Both increase the frequency of human-raptor encounters and both can have negative impacts for the birds and residents of the community.

However, the Service hopes to empower local residents to respond appropriately by following some simple advice. 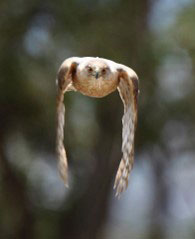 Why do they dive-bomb?

“These defensive behaviors occur only during the nesting season, approximately January through August, depending on the species,” said Madden. “Dive-bombing and vocalizations are a bird’s way of scaring a potential predator away from its nest. They do it to help protect their young.”

In the majority of cases, an aggressive raptor will stop protecting its nest once all its young have fledged and left the nest area. In general, you can assume one month from egg hatch to fledging, and another three to four weeks until the young leave the area.

It is common this time of year to find a raptor ,  such as Cooper’s hawks and American kestrels,  out of the nest on the ground. This is NOT unusual and likely not a cause for concern. Many young raptors at this stage, known as branching or fledging, are old enough to learn to fly and are not in the danger people assume.

“Before taking first flight, younger raptors move onto branches around their nest and may fall,” said Madden. “Parents will continue to feed and protect the young raptors, even on the ground. Unless the bird is in danger from vehicles or unleashed pets, it’s best to leave a healthy chick alone.”

If you do encounter a fledging on the ground, follows these tips to ensure you do not do more harm than good:

The vital role of raptors

“It is important to remember that raptors play a vital role in maintaining healthy ecosystems,” said Madden. “These specialized birds of prey often serve as environmental sentinels, showing early responses to environmental problems, like pollution. They also help control pests, like insects and rodents that can damage agricultural crops and spread disease.” Healthy raptor populations are important to maintaining an environment that sustains both human and wildlife alike.

In Albuquerque, where Cooper’s hawk populations have been steadily growing, support for the bird is also on the rise. The City of Albuquerque announced in May the selection of the Cooper’s hawk as the mascot of the city’s Forestry Program. “With many city parks and urban neighborhoods having active raptor nests, a little bit of awareness can go a long way toward improving our relationship with these birds,” said Madden.