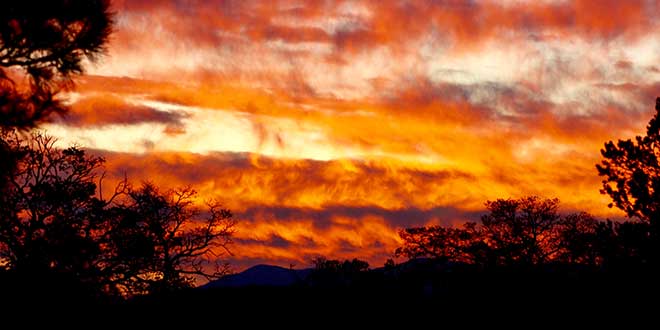 Patrols of lakes and rivers to verify anglers have a license, roadblocks to check for legal bucks during deer season and responding to tips from the public about possible poaching incidents are all parts of the job for New Mexico Department of Game and Fish Conservation Officers. These are likely what we think of an officer doing when the words Game Warden or Conservation Officer come to mind. The “wardens” of New Mexico’s wildlife are the men and women who keep a watchful eye to conserve and protect our state’s wildlife. However, conservation officers also work diligently to protect hunters from the fraudulent practices of those who try to illegally pass themselves off as guides and outfitters to steal money and memories from unsuspecting hunters.

In September 2019, Conservation Officer Logan Eshom received complaints from three separate groups of people who had all been conned by the same man, Norwood Berry. A man who had taken money, a total of $18,000, from all of these individuals with the promise of guiding them on elk and antelope hunts on a private ranch near Ocate, N.M. All the individuals had informed Eshom that after paying Berry, he ceased all contact with them.

Below: Logan Eshom is a conservation officer in the Roswell area. 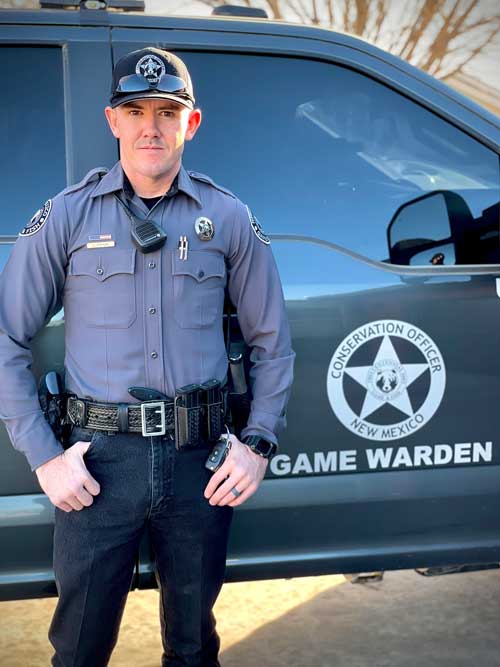 With this information, Eshom began his investigation. It was relatively easy to discover, after quickly checking the guide and outfitter database, that Berry was not a registered outfitter in New Mexico. That would already be strike one against him for illegally outfitting without a license. Follow-ups with the individuals who made the complaints all revealed that they had hunted on the private ranch near Ocate with an outfitter who had employed Berry as a guide in the past. When they decided to book hunts again, they were informed that the outfitter had become too sick to offer future hunts, and they were referred to Berry. Berry was supposedly going to be taking over and securing the permissions and licenses to take people hunting on the ranch. This, however, never occurred.

Instead, after being contacted by these individuals, Berry convinced them he could take them on their hunts and that they would just need to send him down payments. Once the checks were sent, all communication stopped between the supposed outfitter and the individual hunters. After checking with the ranch’s landowner, Eshom learned that Berry wanted to hunt the ranch but never paid for any leases on the property and had not been given permission to hunt there. It was becoming evident that this was a clear case of fraud, with no intentions of providing legal hunts to these hunters.

The next step for Eshom was obtaining a search warrant for Berry’s banking accounts. With all the mounting signs of fraud, a judge quickly issued the warrant. After combing through bank records, all of the individual hunters’ checks were found deposited in Berry’s accounts. Armed with all this evidence, Eshom made contact and met with Berry. After being read his rights, Berry admitted to not being a certified outfitter, even though he was handing out business cards that advertised him as an outfitter. He also admitted to never securing leases for the private ranch and verifying the copies of all the checks he deposited bearing his signature. When asked about the money, Berry admitted that he spent the money to customize his vehicles with winches, headache racks and other equipment.

On top of the fraud and embezzlement, Eshom discovered Berry also had an active warrant for failing to appear in court for three counts of unlawful hunting and fishing. At this point, Eshom had all he needed. Berry was placed under arrest and taken to the Chaves County Detention Center.

On October 29, 2020, Berry pled no contest and was found guilty of felony charges of fraud and embezzlement as well as charges for being an unregistered hunting guide or outfitter. He was sentenced to six years of supervised probation and ordered to pay $18,000 in restitution and $535 in court fees. In addition, his hunting privileges will be reviewed and revoked for a length of time determined by the New Mexico State Game Commission.

Officer Eshom reminds hunters that if you are going to hire an outfitter, first check on the New Mexico Department of Game and Fish website to be sure they are licensed and legal to outfit in New Mexico. http://www.wildlife.state.nm.us/hunting/guide-outfitter-information/

Also, be aware that guides cannot book hunts or contract directly. They must work under the supervision of an outfitter.

There are many great opportunities to hunt in New Mexico but do your research to prevent yourself from being taken advantage of by predatory individuals trying to steal your money and your opportunities for hunts.