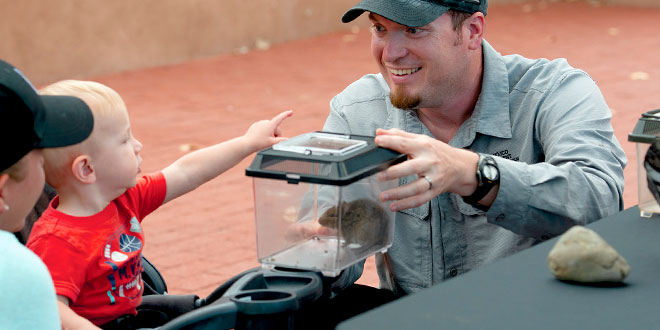 In the pre-dawn hours of Mesilla, bleary-eyed biologists are debating whether the large black bird they just saw fly over was a common raven or a Chihuahuan raven.

The discussion isn’t pedantic one. They are participants in a BioBlitz at Mesilla Valley Bosque State Park, a first for the property.

A BioBlitz is a gathering of naturalists who seek to inventory every living thing they encounter in a short time span— in this case, over the course of a weekend.

“Not only does a BioBlitz get people outdoors, appreciating nature, but it also provides species lists for land managers – a quick inventory of what’s there at that time of year,” explained Kevin Holladay, conservation education coordinator with the New Mexico Department of Game and Fish. “Using the data, biologists can determine if a species’ numbers are increasing or decreasing – how species are doing in general.”

Both of those facets were evident at the event with young children watching and assisting seasoned professionals while they performed different biological sampling techniques throughout the weekend.

Above: Jeremy Lane is the Department of Game and Fish public information officer for the Southwest Area. Below: A yellow warbler has its wing feathers measured to determine age by Mara Weisenberger with the Bureau of Land Management. Department photos by Tristanna Bickford.

Mist-netting (nets of fine filament to trap birds as they fly into the unseen barrier) yielded some very hard-to-observe species such as Crissal Thrasher and Lucy’s Warbler, a tiny species that weighs less than a used stick of lip balm, biologists jokingly compared. Appropriately-sized metal bands were attached to captured bird legs before they were released; information about how far they traveled or how long they have lived can be gathered in the future upon recapture.

Small mammal traps, baited with a mixture of rolled oats and peanut butter, were placed in different habitat types and caught things like white-throated woodrat, “or packrats as they’re more commonly known,“ said Jim Stuart, endangered nongame mammal biologist at the Department of Game and Fish.

“Packrats build a pile of thorned branches or cactus pads to defend their burrows,” he continued. “These ‘middens’ provide shelter habitat for a number of species, including other mammals, reptiles and amphibians.”

Lizard fishing was performed with thread nooses tied to the end of sticks or fishing poles. “Lizards will only let your hand get so close before they run away, but an inanimate stick is tolerated to even touch the top of their head,” said Eric Justice, a plant specialist and naturalist volunteer at the event.

All animals captured were kept for a short time to photograph and help educate participants, talk about ecology and then were released back where they were found.

Experts in things like butterfly and plants accompanied tour groups as they went for short hikes through the varying Bosque terrain.

“The Mesilla Valley Bosque is a very unique area and a great place for a BioBlitz,” Justice said. “Here you have the Rio Grande close to its height for the season, and all the waterfowl, shorebirds and warblers that like the dense canopy of those wetter areas, but you also have upland areas with creosote bush and soaptree yucca that are home to the species we more closely associate with desert. It’s really an oasis.”

If interested in exploring the area yourself, Mesilla Valley Bosque State Park is located at 5000 Calle del Norte in Mesilla, is open seven days a week (including holidays, 7:30 a.m. to 4:30 p.m.) and is free to enjoy. If you plan on deciphering the raven conundrum, get close enough to observe “nasal bristles” and you’ll be in good shape.