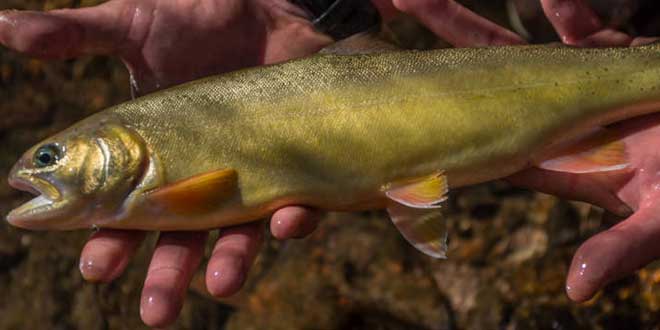 Backcrossing to the Future: Genetic Intervention for Gila Trout

In the summer of 2018, a pair of fish biologists and a pair of horse packers embarked on an arduous 13-hour trek through a remote section of the 3.3 million-acre Gila National Forest in southwestern New Mexico, not far from the Arizona border.

“We rode mules the first five or so miles, but had to continue on foot for the last several miles, basically bushwhacking our way through because there was no trail,” recalls Jill Wick, who manages the native fish program for the New Mexico Department of Game and Fish. 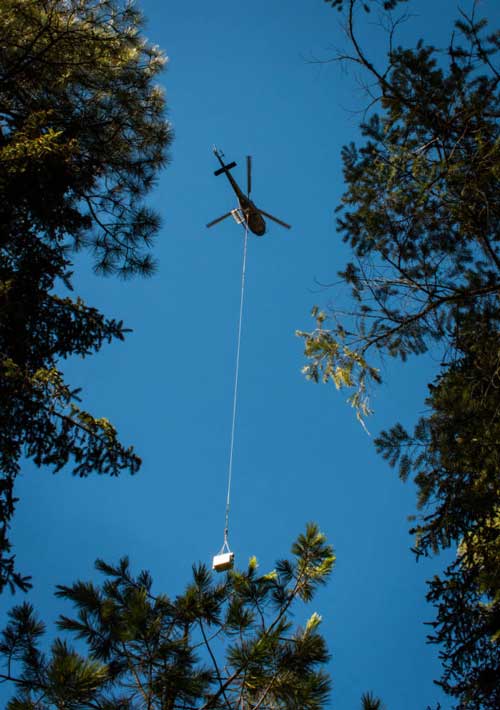 Eventually, Wick and company made their way to a primitive old Forest Service cabin on a ridge at the head of the deceptively-named Big Dry Creek, where they spent the night. At dawn, as the first rays of sunlight streamed through the forest canopy, they hiked down to the water and dispersed across the stream, sporting waders and electrofishing gear. Before long, fish, temporarily stunned, began to float sideways to the surface, exposing iridescent gold sides.

By late afternoon, the team had collected about 50 specimens in net pens. Eventually, a small helicopter arrived, descending onto a clearing near the creek. After being loaded into a 70-gallon aluminum tank attached to a 150-foot longline secured to the chopper, the fish were whisked off through the azure sky.

For those watching from the ground below, the hope was that some of these fish might help to genetically restore an original lineage of one of the rarest native trout species in the United States.

Listed as an endangered species in 1967, the Gila trout was one of the first fish to receive federal protections, before the Endangered Species Act was enacted in 1973. The fish inhabits mountain streams within the Gila River and San Francisco River drainages in New Mexico and Arizona, though the extent of its historical distribution is not known with certainty. By the 1950s, though, severe habitat degradation and displacement by non-native trout had reduced its range to just five streams in New Mexico.

Today, conservation of the fish is guided by the U.S. Fish and Wildlife Service’s (USFWS) Gila Trout Recovery Plan, last revised in 2003, and by a recovery team with members from the Service, the New Mexico Department of Game and Fish, the Arizona Game and Fish Department, the U.S. Forest Service and the University of New Mexico. Collaboratively, the team makes recommendations for conservation and recovery that are carried out on the ground by biologists and many others from the various partner agencies.

In addition to an ongoing effort of maintaining and breeding captive populations of Gila trout at the Mora National Fish Hatchery, in northern New Mexico, the work includes an intensive regimen of stream restoration prescriptions in the wild. Measures include removing non-native species and constructing barriers to prevent them from reinvading before returning native Gila trout to their ancestral streams. Altogether, such efforts have helped to fortify five remnant, genetically distinct lineages of Gila trout populations in 17 streams in New Mexico and five in Arizona; these lineages have evolved to accumulate variations in their genomes that, collectively, help the species as a whole.

In the last decade especially, though, conservation approaches have had to adjust to some extreme circumstances. Recovery of the species hit a major setback with the 2012 Whitewater-Baldy Complex Fire. The largest wildfire in New Mexico state history consumed nearly 300,000 acres in the Gila National Forest and destroyed half of all existing Gila trout populations on the landscape, which necessitated a series of urgent fish collection and captive breeding efforts.

Of the five Gila trout lineages, one – “Spruce Creek” – was nearly wiped out completely by the fire, which especially exacerbated matters for these particular fish. When wildfire decimates a fish population, the genetic diversity of the remaining population is proportionally diminished. And of the Spruce Creek fish, biologists have noted that they’ve been “very difficult to maintain and rear in captivity,” says Wick, adding that many have exhibited deformities, suggesting the lineage’s genetic makeup may be less than ideal. “They don’t look like high-quality fish.”

That’s part of the reason Wick endeavored to take some from Big Dry Creek two years ago, which was then the only stream containing the lineage. After the fish were airlifted out of the forest, some were translocated to their namesake waters in nearby Spruce Creek in order to repopulate it; others were delivered to Mora, to augment captive breeding efforts there – as well as to be included in an experiment intended to restore diversity to the strain.

Indeed, genetic analyses subsequently confirmed that these wild fish were no more diverse than the hatchery’s brood-stock, which originated from fish taken just after the 2012 fire. The lineage was deemed “genetically depauperate” in ichthyological vernacular — and in need of intervention.

Set on some 640 acres in the rural dairy farm country of the southeastern New Mexico plains, in the town of Dexter (population 1,239), the Fish and Wildlife Service’s Southwestern Native Aquatic Resources and Recovery Center includes a fully functional fish culture facility, 76 fish culture ponds and more than a million fish representing 14 different threatened and endangered species. The facility also houses a suite of laboratories with state-of-the-art equipment such as a
MiSeq Next Generation Sequencer, which performs small genome sequencing and targeted gene sequencing; a bioanalyzer, used to analyze the quantity of RNA, DNA, and protein in a sample; and a real-time polymerase chain reaction system, which quantifies the number of DNA copies in a sample during replication.

Typically, the genetic project workflow starts when the lab receives tissue samples from a partner; in fish, this is typically a small fin clip preserved in 95 percent ethanol, explains Wade Wilson, a fish geneticist who serves as the deputy director for the Center.

“Before they get stored in upright freezers at -112 degrees Fahrenheit, fish samples are cataloged and given unique names to describe the species, whether the samples are wild or captive, year collected, and population name or facility name,” explains Wilson. For example, the sample name ‘OgigW12LGC_001’ describes the first Oncorhynchus gilae (Gila trout) sample collected in the wild in 2012 from Langstroth Creek, he points out.

Wilson has made Gila trout work a priority. The fish’s five lineages are important because their genetic distinction from each other makes them, collectively, better able to avoid extinction, he explains. Because the five lineages each evolved in different watersheds over hundreds to thousands of generations, they adapted to what’s optimal for survival in their various areas. During this process, variations in their genomes accumulated. “These genetic variations may be associated with water flow, water temperature, spawning time, proteins to digest or absorb certain food sources or to fight disease, to name a few,” he says. “Historically, there may have been a few individuals that could move from one population to another, but mostly the lineages were separate and evolved independently – with enough genetic differences to provide managers evidence that the lineages should be managed separately.” 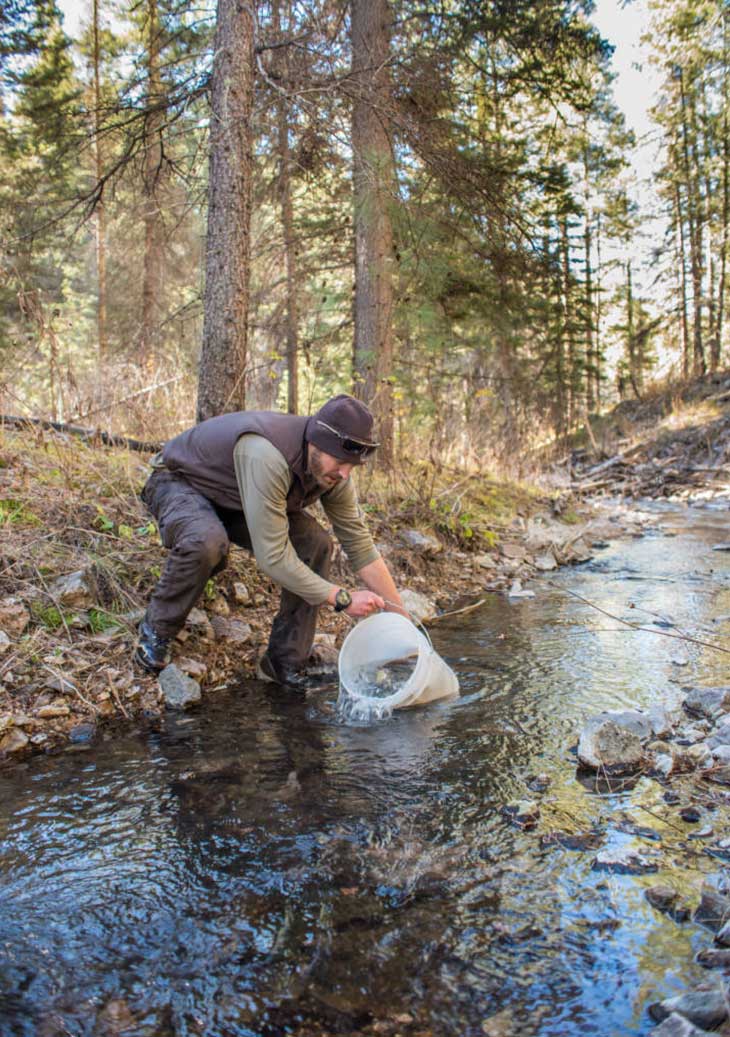 But desperate times call for desperate measures. In relation to the beleaguered Spruce Creek Lineage, the recovery team decided that, while still working to preserve the population’s distinctness, it was necessary to inject a measure of diversity into the gene pool. They agreed, females from the Spruce Creek lineage would be spawned with males from the “Whiskey Creek” lineage, which was selected for both its genetic diversity and its genetic “middle-ground” proximity to Spruce Creek fish on the “family tree.” And, to preserve the unique Spruce Creek lineage genetics going forward, the new, more diverse offspring would subsequently be spawned back with pure Spruce Creek individuals.

“This is called backcrossing,” says Wilson. “Individuals from a mixed lineage are crossed back to one of the two pure parental lineages, in this case Spruce Creek and not Whiskey Creek.”

A caveat: “Once you spawn one lineage with another, you cannot fully recover what was unique,” Wilson says. “You can backcross to the lineage of interest, but the genomes will forever be combined to some degree.”

In the meantime, the backcrossing effort will require patience. The first generation of backcrossed fish were hatched in spring; subsequent generations are expected once annually. And these fish will provide Wilson and his team with genetic samples to be catalogued and archived. According to Wilson, it will take some time to gauge the success of the backcrossing effort “since the genetic rescue of the lineage is expected to take several generations.”

At the same time, adds Wilson, “we as a team are still gathering information about what is or was on the landscape in Arizona and New Mexico, what is currently at Mora, and what cryopreserved milt [semen] we have available to us.” (The Fish and Wildlife Service’s
Warm Springs Fish Technology Center, in Georgia, stores Gila trout milt in a cryopreservation lab.) “Each year we will take this information and adapt our original plan as needed to keep the lineage moving forward. Recovery of the species is a challenging and adaptive process.”

Wick readily agrees that recovery work for the species has had to adapt. “We focused more on replicating single lineage populations in the past but as we learn more about these fish, as we lose more individuals and encounter difficulties propagating them and as we discover the loss of genetic diversity encountered after the fires, of all lineages, we’re beginning to realize that mixing lineages may be a more appropriate way to conserve the species as a whole,” she says. “Backcrossing is an experiment… and it has worked for other species.” (The strategy has been used to help conservation of the Florida panther, among other species conservation efforts.)

Like Wick, Wilson is cautiously optimistic: “There are numerous talented, dedicated and passionate people involved in the process, so I’m hopeful recovery is moving forward in a positive way. It may not be the same path the species was on prior to the 2012 and subsequent fires, but it’s a path forward.”

As if mirroring nature itself, the work to conserve the species – from putting sample specimens through the automated DNA sequencing machine in Dexter, to maintaining and breeding fish at Mora to collecting wild fish from their diminished range in New Mexico’s most far-flung streams – is likewise evolving.

“As we learn new things and encounter new obstacles, such as wildfire or loss of genetic diversity, we have to adapt how we manage and conserve the species,” Wick says. “That is an ongoing lesson and, generally, the lesson of science.”

Ben Ikenson is a former writer for the U.S. Fish and Wildlife Service.