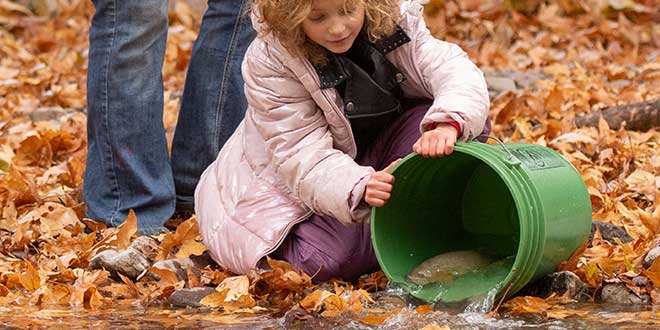 A fishy community focused on the long game

Fishing, especially fly-fishing, is often a solo activity. Even if you travel to a fishing site with a group of people, you park, grab your equipment and everyone quickly breaks off heading in their own direction.

Above: A young girl released a Gila Trout into Whitewater Creek. Tristanna Bickford, New Mexico Department of Game and Fish.

A day on the water can be peaceful, you can hear the birds chirping and the water flowing at your feet. A relaxing day without cell phone reception, no Facebook, just you and the water. It can be educational as you gain new skills or more technical skills. It can be fun, as you strip the line in, feeling the fight of a fish on the other end. The water has a way of healing, allowing you to think or just letting your mind wander where it wants, the fresh air filling your lungs. Even if you don’t catch a thing, being on the water is refreshing and can give a sense of freedom.

Imagine yourself fishing a small stream that runs from high mountain springs and fills in when the snow melts. The leaves are changing and showering the forest floors in brilliant orange and red. You find the perfect spot, you give a few short casts, readjust your aim and land your fly in just the right place.

Your line grows tight, you start reeling in your catch, a tug begins at the corner of your mouth as the golden-colored trout flash at the end of your line. You recognize the Gila trout’s iridescent gold sides that blend to a darker shade of copper over the gills. After a quick picture with this native fish, you release it, your face lights up as it sails away.

Have you ever stopped to wonder just how that trout ended up in the stream? Realized that the process took many years, talented and creative biologists and partnerships to make it happen?

Gila trout are currently listed as threatened under the U.S. Fish and Wildlife Service’s (FWS) Threatened and Endangered Species Act (ESA). This status is one that bears heavyweight and responsibility to those who manage them.

The New Mexico Department of Game and Fish and other state and federal agencies have the responsibility to seek out and grow habitats to help the endangered Gila trout reestablish its self in waters where it once was found. This is something that the Department takes very seriously and works tediously to find solutions that provide restoration for the Gila trout as well as recreational opportunities for anglers hoping to catch this native fish.

While fishing is often a solo activity, fish restoration is a community effort. State and federal agencies, non-profit organizations, landowners, anglers and other outdoor enthusiasts all join together, ensuring the outcome is a healthy fishery. Without all of these partners, this would not be possible.
On a late fall morning, partner agencies joined community members to make the trek to Whitewater Creek, in the Gila National Forest, near Glenwood, N.M. Donning jackets, with light gloves, a cup of hot cider or hot cocoa in hand, nearly 100 people watched as two large fish stocking trucks opened up their tops reveling the Gila trout held safe inside, unknowingly waiting to be stocked into their new home.

Biologists from the Mora National Fish Hatchery and the Department of Game and Fish grabbed fish nets and climbed onto the trucks. Anxiously, kids and adults alike held five-gallon buckets, waiting for their turn to fill their bucket with water and a few Gila trout. Awkwardly they carried their buckets to the nearby stream, tipping the buckets, emptying water and trout into Whitewater Creek. History was made as the threatened species retakes its place, returning to the creek known as their native range.