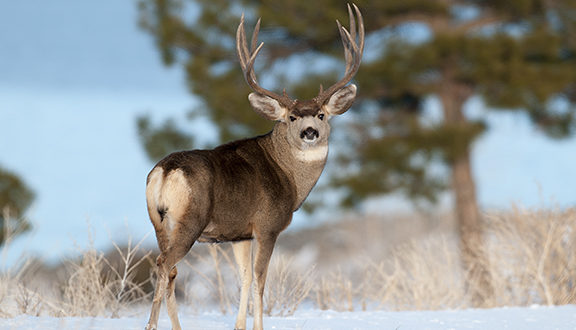 Because of the influence of precipitation on fawn survival, most of New Mexico’s fawns are lost during the dry summer. New Mexico experiences regular periods of drought; because of this, the state’s deer populations are frequently below habitat carrying capacity. At least 2-3 consecutive years of timely summer rainfalls are necessary to increase populations. 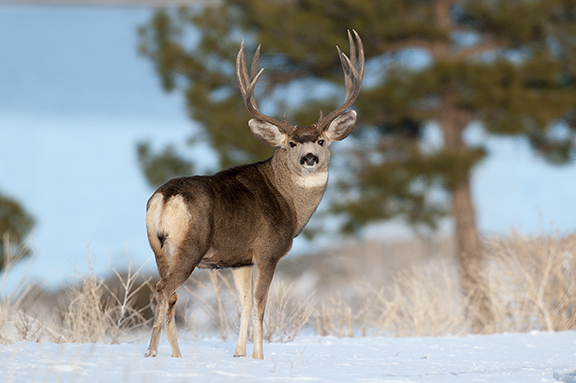 Drought may also impact deer distribution on the landscape; in arid regions, deer will travel up to 30 miles to take advantage of the sporadic precipitation events. This redistribution may appear as though populations have declined when in fact they are temporarily using a different part of the landscape to maximize water and forage potential.

The New Mexico Department of Game and Fish conducts winter aerial surveys annually to monitor post-hunt composition ratios. Fawn-to-doe ratios are used to monitor population productivity and trajectory and buck-to-doe ratios help determine hunting opportunities. Mule deer populations in southwestern ecosystems require at least 35 fawns per 100 does over the long term to maintain stable populations. This is much lower than the 60-70 fawns per 100 does required in northern states, because New Mexico does not experience the heavy winter die-off that is experienced in those areas. Below is the deer hunt forecast for the 2023-2024 season by region of the state.

This region has some of the highest deer densities in the state. Because of the higher elevation, suitable habitat and northern latitudes of this region, annual precipitation leads to greater herd productivity in most Game Management Units (GMUs). In addition, migratory herds migrate from Colorado to winter in GMUs 2B, 4, 5A and 5B. GMUs 2B, 2C, 4, 5A, 5B, 6 and 8 all have high deer densities and some large bucks are often harvested in these units. The long-term composition ratios are 29 bucks per 100 does and 39 fawns per 100 does.

In general, deer densities in the plains and rolling hills habitats in northeastern New Mexico are not as high. However, decent populations can still be found on scattered and patchwork public lands in this region. Hunters will need to search more and be mobile to find bucks on public lands. The mountainous units in this region have good deer numbers; in particular, GMU 45. This unit has a stable deer population with the potential to harvest a large-antlered buck. Although the 2022 wildfire in GMU 45 should be beneficial in about five years, the department is uncertain how the fire will impact deer in the short-term. The long-term composition ratios are 36 bucks per 100 does and 35 fawns per 100 does. 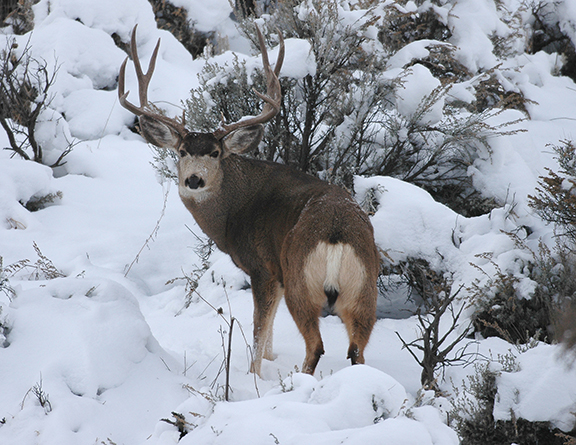 Hunters report that hunting in southeastern New Mexico has been difficult during the past few years. Despite this, success rates remain generally high and within the targeted guidelines. The buck-to-doe and fawn-to-doe ratios remain high, which indicates that the populations are stable or growing. The highest deer densities are found in GMUs 29, 30, 31 and 32. Large bucks can be harvested in any GMU, but GMU 33 is likely the best unit in which to find a large-antlered buck in this region. The long-term composition ratios are 35 bucks per 100 does and 35 fawns per 100 does.

Drought seems to have impacted mule deer populations in the southwest more than other regions in the state, and recruitment in the southwest has been negatively impacted. However, success rates in most southwestern units remains within the targeted guidelines. Higher mule deer densities can be found in GMUs 17, 20, 21, 25, 26 and 27. GMUs 17, 27, and the Burro Mountains present the best opportunity for harvesting a big buck. The Coues white-tailed deer population continues to be strong and growing. The best opportunities for a Coues buck are in GMUs 23, 24 and 27. Long-term composition ratios are 30 bucks per 100 does and 32 fawns per 100 does.

Orrin Duvuvuei is the Deer Program Manager for the New Mexico Department of Game and Fish.